Well, Ubaldo Jimenez didn't get win number nineteen and Carlos Gonzalez didn't make up any ground in the Triple Crown race from the bench, but otherwise it was a pretty successful day for the white-hot Rockies, who won their ninth straight game before a sell-out crowd and improved to fourteen games over .500. With the win Colorado stayed 2.5 games back in the West (1.5 behind San Francisco) and 3.5 back in the Wild Card.

My math has said that the Rockies will need to get to 92 wins to win the West, and with a 14-6 finishing kick they will get there. That's a whole lot more possible than the 30-10 finish they were faced with to reach that goal just a few weeks ago.

For a while it looked like Jimenez was going to get saddled with the loss despite only allowing a run on six hits over six innings while striking out eight. However, Colorado's offense finally came to life against Rodrigo Lopez (who pitched like the 2007 version this night) in the seventh. Three consecutive one-out hits by Messrs Mora, Spilborghs, and Olivo (the last of which was a RBI single), were enough to tie the game.

That was it for Lopez (5-14), and another former Rockie, the 121 million dollar man himself Mike Hampton, gave up Jonathan Herrera (excuse me, The Answer)'s sacrifice fly to score the go-ahead run. From there, Rafael Betancourt and Huston Street took care of matters (a little too dramatically for my taste, Huston, but you got the job done). Matt Reynolds, who had pitched a scoreless seventh, received his first major league victory (1-0), while Street recorded his 18th save.

Colorado looks to complete their third straight series sweep tomorrow. They are going with Jhoulys Chacin against a sneaky effective Ian Kennedy. 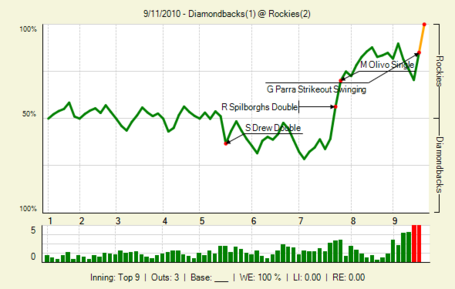