Share All sharing options for: Evidence of Rockies cheating found as Colorado wins tenth in a row on Giambi walk-off

Good news and bad news folks: The good news is that this was another great win for the Rockies, the big woot this time around goes to Jason Giambi for the decisive two run blast, with a slightly smaller woot to Ryan Spilborghs for his game tying double. Oh, and another big woot to Esmil Rogers and other relievers for shutting the door on the Diamondbacks after Jhoulys Chacin lacked effectiveness early. The roll this team is on has taken them to the steps of Rocktoberdom. The bad news is that I don't know if the commissioner's office can let this stand once he reviews the evidence I've come up with that the Rockies might be winning these late inning contests by nefarious means.

Honestly, I just kind of stumbled on it after first looking at the Rockies WPA chart page from FanGraphs for this afternoon's game, and comparing it with past games. I hope we don't have to vacate this win, because that would be a bummer, but tell me what you think after you review the evidence after the bump. 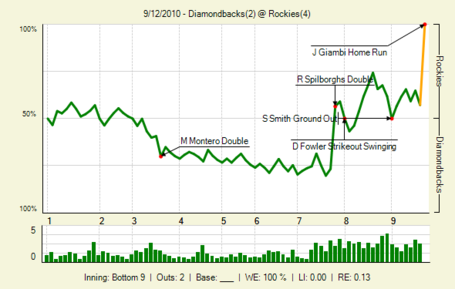 The following is a Purple Row exclusive, but I'd like to present to you clear evidence that Colorado did in fact come by their win this afternoon via some pretty shady means. The following is a chart from the sixth inning, when Colorado still trailed the game two to nothing:

and here is the same chart from the seventh inning:

Did you see that? It's easy to miss because it's kind of subtle.

B Boyer relieved I Kennedy.

That's right, the Rockies somehow used the powers of mesmerism to get Arizona to switch out from an effective and decent starting pitcher to one of their many terrible relievers. What's more, you see a similar switch take place in the ninth, in advance of Giambi's game winner:

Tell me you saw it that time and I'm not just making this stuff up. It was another ineffective reliever that Arizona just put in a tie game situation against one of the NL's best teams. I call cheating. Clearly the Rockies have a guy in the right field scoreboard with a mirror he can aim into the opposing manager's eyes to trigger a hypnotic state, and can thereafter use that mind control to get that manager to put in pitchers that really shouldn't be there.

Now the conspiracy goes a little deeper than this, after all Colorado also switched from a starting pitcher to relievers, but Arizona failed to score off of them. Why was that? Now I haven't uncovered much evidence of this, but from what I'm told, Colorado has used field operatives, which they misleadingly call "scouts", to bring in quality relievers rather than the mediocrity that Arizona uses. What's scary is that these spooks could be in any of our hometowns right now watching ballplayers.