Two guys are at a bar finishing the last of their beers.

Guy A: What did I tell you? The Rockies are a bunch of cheaters.

Guy B: What do you mean?

A: Once the Padres got a 5-0 lead, the Rockies started using balls that weren't stored in the humidor when their guys batted.

A: The league is in on it. They turn a blind eye to it

B: Sure, buddy. It's in MLB's best interest to facilitate the Rockies' cheating? How do you even think this stuff up?

A: Well, they are. I just can't prove it because the ball boys give the non-humidor balls away towards the end of the game.

B: Do you know how stupid that sounds?

A: It's not stupid. It's actually happening.

B: And as you mentioned earlier, the non-humidor balls are given to fans to hide the evidence.

B: How long has this been going on? Since it was installed, or ever since 2007?

A: I can't really pinpoint it, but Jeff Cirillo did bring it up before 2007.

B: So answer me this: If MLB wants the Rockies to win, why haven't they won any World Series yet?

A: MLB needs to be subtle about this. Slowly build it each season. 2007, that whole Rocktober thing. But it was in the best interest of baseball to have the Red Sox win. Because it's the Red Sox. 2008, yeah, make it look like a fluke. 2009, let's dangle the playoffs again for the Rockies, but a Phillies-Yankees World Series makes for great ratings.

A: Ask me at the start of October.

B: OK, but when will the Rockies winning the World Series ever be in the best interest of baseball or garner big ratings? That Rockies-Twins match-up must be Selig's wildest dream come true.

B: Oh, and the Rockies lost tonight. Non-humidor balls for four runs and then back to the humidor balls?

A: See, they need to be subtle.

B: Yeah . . . why can't you just accept that when your team loses to the Rockies it's because the Rockies outplayed them? You're going abroad to find monsters to destroy, which you shouldn't be doing.

Oh, a game wrap after the jump.

Jeff Francis piled up the pitches in the first three innings and left after he completed that third frame. He also left with allowing a two-run homer to Miguel Tejada. Esmil Rogers relieved Francis and then allowed three more runs in the fifth inning (the last one scored as an inherited runner with Joe Beimel in). But the Rockies offense came back in the bottom of the fifth to make it a one run game. Carlos Gonzalez hit an RBI single and Tulo smashed a three-run single. Franklin Morales allowed a dinger to Oscar Salazar. 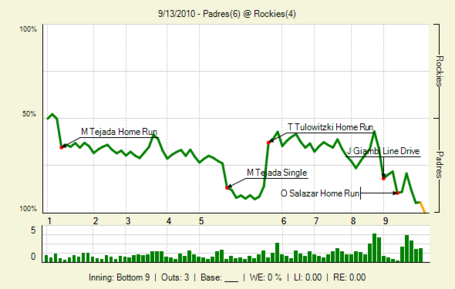