Upon landing in Denver, Heath Bell made a prediction that the Padres were going to kick some (redacted) in the series against the Rockies. Despite nearly being the one that prevented that from happening (temporarily, at least), Bell's prediction held true as the Padres escaped with the W - for the game and for the series.

As big as some of the Friars (Jon Garland, Aaron Cunningham, Matt Stairs) came up in this game, the Rockies may have beaten themselves by not locating pitches well and, at times, disregarding fundamentals. Jason Hammel was roughed up for four runs on ten hits in four innings, and struggled with the command of his fastball the entire time. Meanwhile, Eric Young Jr. committed a couple of fielding errors and Edgmer Escalona failed to cover first base on a grounder to Todd Helton that had the potential to be a double play ball.

Despite all of that, the Rox did their best to rally from deficits of 4-0 and 7-4. Carlos Gonzalez's two-run double and a Helton sacrifice fly put the Rox on the board and got them to within a run. However, the Padres gave themselves some cushion on a pinch-hit two-run homer by Stairs off of Rafael Betancourt. In the ninth, Helton led off with a double off of Bell and was driven in by a two-bagger by Mora. After Seth Smith failed to execute, Jay Payton pinch-hit for Miguel Olivo and promptly singled in Mora to cut the lead to 7-6. After unintentionally-intentionally walking Jason Giambi, Bell induced Eric Young Jr. to swing early in the count and ground into a game-ending double play. It was EY's first GIDP of the season.

The season isn't over by any means, but the Rockies obviously have some work to do. It starts by winning tomorrow. 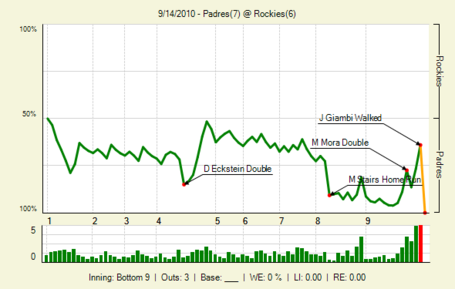