Rockies 9, Padres 6: Bats take out frustrated revenge on Padres. There were no survivors.

Share All sharing options for: Rockies 9, Padres 6: Bats take out frustrated revenge on Padres. There were no survivors.

Downside: so did Adrian Gonzalez.

Both of those men are phenomenal at the game of based balls.

I'll be honest with everyone, I had to follow the game on gameday today and get updates on the more detailed plays from MariaM and Muzia, with special text appearances from FI#2 and Mondo.

Things that were awesome about today: Scoring 9 friggin runs off of Clayton Richard and that tough-as-old-chuck-roast San Diego bullpen. Honestly, that pitching staff is SO good and we made mincemeat out of them.

It was I all along, adding commentary and OPS splits for the two starters! Wa ha ha ha!

What we saw out of the two starters was pretty much what we expected. Jorge De La Rosa struck out a bunch of guys and walked barely anyone (stupid veterans taking their stupid walks), but gave up too many home runs (you know, more than zero). Richard got hit around a lot, but didn't really have a chance to walk. Nobody was waiting for Richard to settle in today, and it showed.

Row Call and fangraph past the jump.

Our only centurion had nearly 3 times as many posts as anyone else. Nearly as many as any 3 posters combined. 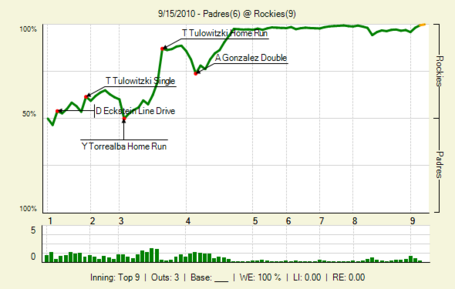