Ubaldo Jimenez wasn't great, but he was good enough on this night to tie Roy Halladay and C.C. Sabathia for the MLB lead in wins.

The Rockies' ace struggled with his fastball control early and often as he battled with a high pitch count through 6.1 innings.  He allowed six hits (five by the 7 and 8-hole hitters) and four runs.  Fortunately, the Rockies continued their traditional dominance of Hiroki Kuroda.

The offense started with (who else?) Troy Tulowitzki, who clobbered the first pitch he saw for a two run home run.  So much for the road slowing him down.  He finished the night with a flyball to the warning track, popout, walk and fielder's choice.  So almost a boring night by his standards, though his 12th home run in September tied Matt Holliday (2007), Andres Gallaraga (1996), Vinny Castilla (1996, 1998) and Dante Bichette (1995) for the most home runs in a calendar month.

The offensive barrage opened up in the fourth, when Colorado pieced together five singles (all on elevated fastballs) to plate three runs.  With the help of Todd Helton, who had a four hit game, the Rockies added two insurance runs in the seventh inning.

Matt Belisle struck out Casey Blake with the bases loaded in the seventh and induced a Matt Kemp groundout to extinguish the last Dodger threat of the evening.  Huston Street worked an uneven ninth for his 11th consecutive save in guaranteeing the Rockies at least a .500 season.

Randy Wolf repaid the Rockies back in part for inexplicably leading Los Angeles to the division title in 2009 by dominating the Giants tonight in San Francisco.  That coupled with the Rockies win move Colorado back to 1.5 games behind in the NL West.  That represents the closest the Rockies have been since July 10.

The San Diego Padres also got demolished in St. Louis with Mat Latos pitching.  That brings Colorado to within one game of San Diego, meaning they could be in second place in both the division and wild card by tomorrow. 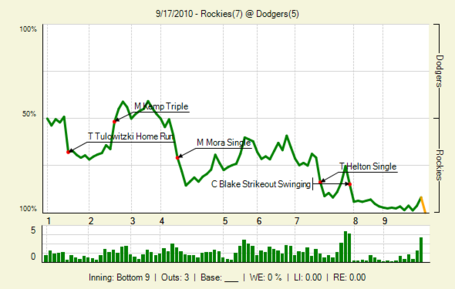