There are no words in the English language that adequately describe the offensive prowess of Troy Tulowitzki during September 2010. The Rockies SS blasted another two bombs in Colorado's 12-2 victory today, going 3-5 overall with three runs and four RBIs.

For those of you who are keeping score, that's 14 home runs in 18 days for Tulowitzki (in the last 15 games, even). Tulo has eleven games to hit seven homers and break the MLB record for dingers in a month (20, by Sammy Sosa in June 1998). The MLB record for homers in September/October,17 by Albert Belle, seems even more attainable at this point. In other words, Tulo is in some pretty uncharted waters.

On this day, Jhoulys Chacin wasn't half bad either, going eight shutout innings, allowing nine hits and striking out two on the day to improve to 9-9 (3.30 ERA) in his rookie season. Melvin Mora had a pretty darn good day at the plate as well, going 4-5 with his second grand slam of the year (his 5th homer) and knocking in five men.

The win, which guaranteed a winning 2010 for Colorado, was the Rockies' 13th in 15 games. Depending on the scores of other games (Go Cardinals and Brewers), Colorado will at worst remain 1.5 games out of the division lead. To get to the magic number of 92 wins the Rockies will now only need a 10-4 finish to the year.

If only we could have actually seen this game (stupid Fox). 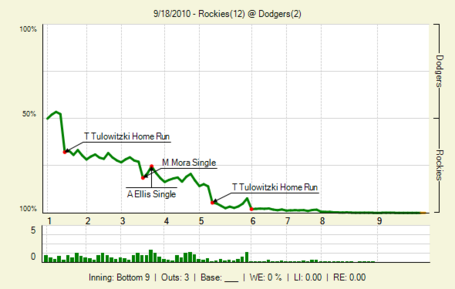