Before this game, SportsClubsStats gave the Rockies an 84% chance to make the playoffs if they finished 10-4, 55% if they finished 9-5.  That means they could realistically afford four losses in the last fourteen games, regardless of when they occurred.  And today should not have been one of those four.  This was not a game a playoff hopeful should have lost.

The Dodgers had the advantage at first pitch, with a struggling Jason Hammel facing Clayton Kershaw, who hadn't allowed a run vs the Rockies at Dodger Stadium in 29 innings.  But it changed quickly.  Kershaw walked the bases loaded and Jason Giambi hit a high flyball to left field with two outs.  Jay Gibbons whiffed on the jump, and three runs scored.  Truthfully, it was sorely misplayed and all three runs were a bit of a gift.

At that point, the Rockies were winning 6-1, the Dodgers' defense was atrocious on at least four misplays, and the Giants' beat writer was quick to imply Los Angeles was throwing the game.  This is a game Clayton Kershaw was starting.

Hammel allowed a solo shot to Andre Ethier in the bottom of the inning, but Gibbons helped give the Rockies three more runs in the second.  Paul Phillips reached on a routine dropped catch to lead off the inning, singles from Dexter Fowler and Carlos Gonzalez and a double from Jonathan Herrera polished off the Rockies' scoring.  Unfortunately, they shut down their offense then.

Jason Hammel struggled through a 3-run fourth wherein he permitted four straight two-out hits and seemed bothered by a back injury.

Matt Belisle pitched the sixth and was sent out in the seventh in the first of two questionable calls by Jim Tracy.  Matt Kemp hit a home run to bring the deficit to within one.  Huston Street allowed consecutive doubles to Rafael Furcal and Matt Kemp to blow his first save since.

After a leadoff walk to Ryan Spilborghs in the ninth, Eric Young Jr. pinch hit for Paul Phillips.  Tracy elected not to put the bunt on at any point, and Young promptly grounded into a double play.  It's a bit of strange choice.  Two walks and a single later and Carlos Gonzalez Ked on a pitch in the dirt with the bases loaded to end the inning.

Troy Tulowitzki whiffed on a line drive/ground ball to lead off the bottom of the eleventh, but Rafael Furcal fortunately grounded into a double play to follow off Manny Delcarmen.  Unfortunately, 1B umpire Jim Reynolds didn't see it that way, and Furcal was called safe.  While replays showed he was indeed out, Reynolds shouldn't get all of the villification here.  The difference in the call there was about 20% win expectancy, and Delcarmen didn't pitch effectively.

There are plenty of blame to go around here.  Jason Hammel is not proving to be the #3 starter the Rockies need him to be.  After being walked intentionally in the first, Troy Tulowitzki started pressing, striking out three times and chasing bad pitches, made one official error and one costly unofficial error.  Carlos Gonzalez stranded six base-runners, none more painful than the three in the 11th.  Huston Street continues to struggle with location as he blew a save.  Manny Delcarmen couldn't get three outs.  Jim Tracy continues to push Matt Belisle too far and wouldn't bunt Young in the 11th.  The offense was shut out for nine innings after the second inning.  The staff threw four wild pitches, and Paul Phillips didn't do much to stop it.

Regardless of whose fault it was, the Rockies cannot afford to give games away, and they absolutely did today.  They are by no means out of it by any stretch of the imagination, but this loss hurts. 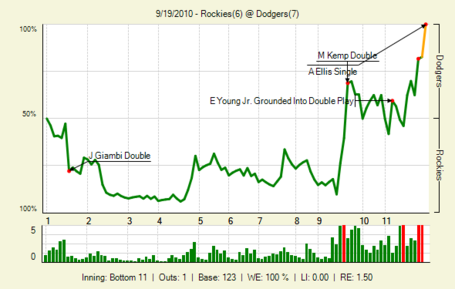