Share All sharing options for: Rockies bullpen gets trampled by Philly, Rox lose 12-11

At the start of the seventh inning, the Rockies led seven to three, and then this happened:

And then a valiant but ultimately short rally later, the game was over.

After losing three in a row, the season now sits in a precarious spot, a very precarious spot, where there is no likelihood of playoffs without a lot of winning, both home and away against good teams and bad. 2010's not completely over, but it's going to take a different team than the one we've seen up to this point to get into the postseason. I'm not convinced the Rockies are capable of remaking themselves in a day.

There's likely to be a lot of blame pointed at Delcarmen tonight, but take a closer look at the work of Joe Beimel and Matt Reynolds that inning and of Matt Belisle the inning before. Delcarmen struggled, but so did everybody else. Let him work with our pitching staff and see if they can fix him before giving him the traditional Western posse and a rope welcome.

One definite plus besides the offense was starter Jhoulys Chacin, who looks more like a playoff worthy starter everyday, he battled through five plus innings despite not having his best stuff and put the Rockies in a position to win. 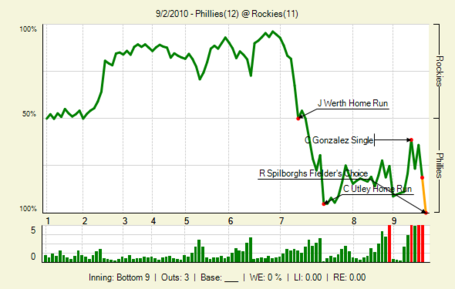