I KNOW THEY HAVEN'T PUT IN THE HUMIDOR YET (or have they?), SO DON'T GET YOUR PANTIES IN A BUNCH.

Anyway, the house of horrors that is Chase Field continued to haunt the Rockies' bats in yet another road loss to the lowly D-Backs. Jorge De La Rosa pitched pretty well outside of the third inning, in which he allowed three runs with two outs. He finished with seven innings pitched and allowed just those three runs on six hits while striking out five and walking just one. Yep, this one was on the offense. Bad approaches and bad swings were quite prevalent throughout the night, and it all culminated in a very ugly ninth inning against mediocre D-Backs' closer Juan Gutierrez in which Troy Tulowitzki and Melvin Mora struck out, and Todd Helton hit a lazy flyball that was caught in foul territory by Ryan Roberts.

Stephen Drew killed the Rockies again, as he reached base three times and scored a run. Roberts was no fun to deal with either, as he had a couple of hits, an RBI, and a run scored. Kelly Johnson provided the big blow, as his two-run homer gave Arizona a 3-0 lead. JDLR settled down from that point, but the Rockies' bats were virtually non-existent until the eighth inning, when Miguel Olivo hit a leadoff double for his second hit of the night. Then, Ryan Spilborghs pinch hit for DLR and promptly knocked in Olivo with a single. Dexter Fowler then hit a ball very well to center (that was perhaps knocked down by all of the residual wind caused by the D-Backs striking out an MLB-record 1,404 times this year) that ended up in the glove of Chris Young. Jonathan Herrera and Carlos Gonzalez followed with consecutive strikeouts to end the inning and the scoring threat.

The Padres and Giants both won tonight, so that obviously sucks. 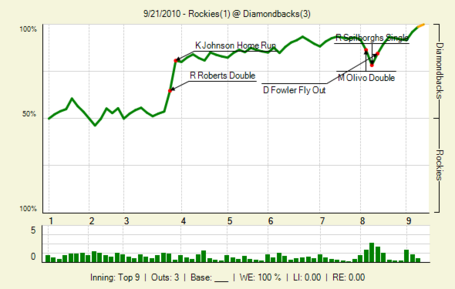