One low pitch that Pat Burrell got all of and a strong performance by Tim Lincecum were enough to give the Giants a 2-1 victory over the Rockies on Friday night. For the Rockies, the loss was their fifth in a row after cutting the NL West lead to within two games last weekend, and almost certainly marks an end to any playoff ambition they might have had for 2010.

The Rockies scored their one run when Seth Smith led off the sixth with a double, and eventually came around to score on an Eric Young Jr. single. Burrell's blast came in the next frame, as Chacin walked Buster Posey to lead off the inning and then gave Pat the Bat the pitch that he apparently was looking for. 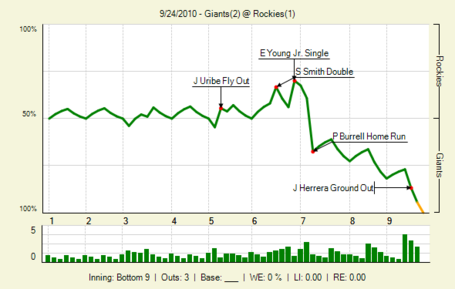