If I were to hand-pick a pitcher to throw a no-hitter at Coors Field, it would be Matt Cain.  He would get at least two chances per season, seemingly allows three hits per game and has ranked 3rd in the NL in BABIP in each of the last two years.  If only Jim Tracy had put a line-up out there without veterans from the minor leagues like Jay Payt...

According to Andrew Baggarly, Matt Cain has now taken a no-hitter to the seventh inning five times, to the eighth inning twice.  And JAY LEE FREAKING PAYTON broke up the no-no in the eighth today on an infield single up the middle that a half dozen Rockies' infielders probably could turn into outs.  Melvin Mora, on the bench with the flu, followed with a mammoth pinch-hit two-out two-run home run to center to break up the shutout.

The most consistent starter on the staff, Jorge de la Rosa, allowed 3 ER in 6 innings pitched, which marked a good rebound from the walk-home run the permitted to lead off the game.  de la Rosa has now gone 12 of 13 starts allowing 1, 2 or 3 ER over 5+ IP.  The only outsider was August 15, when he departed in the 8th with two runners on and three runs charged.

After a Carlos Gonzalez one-out single in the ninth to bring up the tying run in Troy Tulowitzki and Jason Giambi, Matt Cain didn't shy away. Tulowitzki skied a popup - he leads the NL in popup rate -and Giambi struck out looking, one pitch after appearing to injure his right bicep.

As has been the case in 2010, the Rockies found themselves behind the eight-ball and fought all the way back, just to wind up short in the end.

The elimination number for the Rockies is now three. 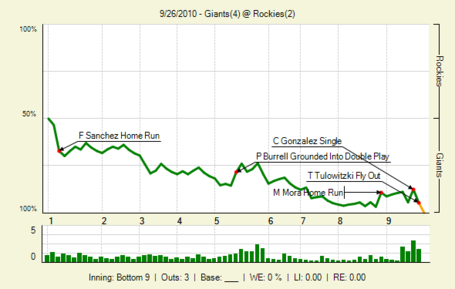