The usual story. Ubaldo Jimenez allowed a two-run single in the first and then pretty much dominated the rest of the game. He allowed only one hit after that Blake single in the first. Jimenez left after seven innings, which led to Franklin Morales and Octavio Dotel pitching a clean eighth inning. Morales and Dotel struck out three, all looking.

I guess Ubaldo Jimenez has one more chance at getting win no. 20.

Carlos Gonzalez hit a homer to center field in the fourth inning. Not much else coming from the bats. In the seventh inning, Todd Helton reached on an infield single. But then Jay Payton hit into a double play that ended any momentum the Rockies had at that point. Damn, Ted Lilly owned the Rockies tonight.

That door is almost shut now. Six games left in the regular season. 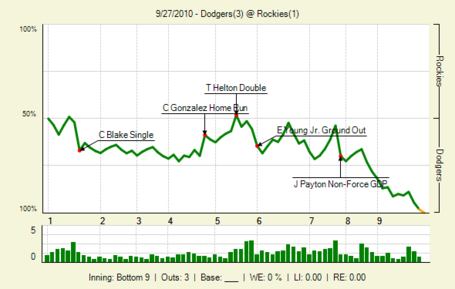