What a good run it was.

With the combination of the Braves beating the Marlins earlier today and the Giants polishing off the D-Backs moments ago, the Rockies' latest loss to the Dodgers - a 9-8 defeat that ensured the Bums another series victory over the Rox - officially eliminated them from playoff contention.

This game was a microcosm of the Rockies' 2010 season. They started off the game with a few bumps in the first inning as Jeff Francis allowed two two-out singles, but were able to get away unscathed. Then, Chris Nelson (who was finally penciled into the lineup) doubled and was driven in by a Carlos Gonzalez single to give the Rox an early and slim 1-0 advantage. However, not unlike how the Rockies experienced a disastrous road trip in the middle of the season, Jeff Francis had just as bad of a third inning, giving up five runs as the Dodgers took a four-run lead. Trailing 6-2 in the seventh, the Rox stormed back to make it a whole new ballgame, just as they did upon winning ten straight earlier this month. Todd Helton and Dexter Fowler each hit two-run homers for the seemingly resurgent Rox. However, late-season acquisition Octavio Dotel (who many will blame for the Rockies' failure, I'm sure) was touched for a couple of runs in the eighth which allowed his former team to take the lead, and it would end up being for good as despite showing some late fight (including a bases-loaded walk by Chris Iannetta), the Rockies just didn't have enough gas left in the tank for one last push.

Now, after losing eight of their last nine games, Colorado will find themselves spending October as the rest of us will - watching the postseason. Let's hope for a nice finish to the season, as well as to attain a lesser goal that I have set for the club, which is finishing ten games above .500.

As my Facebook status update says, all you can really hope for when you're not a fan of the big three (yes I'm including the Phillies) is for your team to stay in contention until the last week of the season. Well done, Rockies - go get 'em next year. 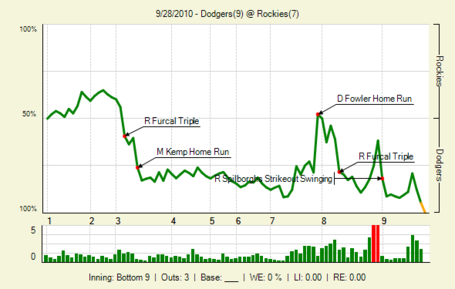