Alright, that was Journey's unforgettable "Don't Stop Believing".  I'm going to break this set and say that there's a door here that's still looking mighty attainable to me, and apparently it seems to be still beckoning the Rockies as well.

I know some of you whippersnappers are pretty young and might not be able to remember all the way back to 2007, but I just thought I'd like to remind you that the Rockies not only had to close a gap on the Padres that season, but on September 12th, they were also seven games behind the New York Mets. This gap here:

Yep. This gap here looks workable. I think we could make ourselves a stew out of this.

Jason Giambi and Troy Tulowitzki, yes, you guys are getting shoutouts tonight, you know why. You rocked. Seriously. You too Aaron Cook. Man, all this week, I didn't think you had it in you, but you showed me something tonight, you know that? You showed what heart is, man. Alright I'm going to break it down a little right now, and spin this one for all the kids who still are playing for something.

You pack your bag, you take control,

Your moving into my heart and into my soul

I won't be walking on thin ice, to get through the night.

I know your business, but I don't know your name...

Hold on tight, you know she's a little bit dangerous,

She's got what it takes to make ends meet,

The eyes of a lover that hit like heat.

Yeah, that one goes out by Mondogarage who requested it because he likes all Swedish sugar pop bands. Can you believe Don Johnson turned that song down before Pers Gessle kept if for Roxette? Seriously. Don Johnson. Miami Vice. Didn't like Roxette.

I guess it takes all types... anyway I'm sending props out tonight to Huston Street and Raffy Betancourt, fire and ice, rock and roll.., 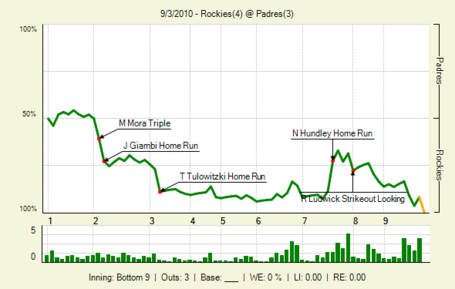 All rights reserved, retransmission or dissemination of this program is strictly prohibited. You've been listening to Rox Girl, until next week peeps, we're keeping it not dead.