What do you mean these games still count? Rockies listless in loss to Cardinals

Share All sharing options for: What do you mean these games still count? Rockies listless in loss to Cardinals

The pitcher has a dead arm, the star outfielder was sitting this one out. In losing six to one, the Rockies looked every bit the team that had recently been eliminated against the Cardinals in their series opener on Thursday night. The Rockies mustered just four hits off of Chris Carpenter, one each by Dexter Fowler, Troy Tulowitzki, Ian Stewart and Chris Iannetta.

Jason Hammel started and showed more signs of the pitching fatigue that has been hampering his performance down the stretch. Hammel gave up an RBI double to Albert Pujols in the first inning and then multiple runs in each of the next two innings as the Cardinals jumped to a five to nothing lead and didn't look back. The Rockies bullpen took over for the last five innings and allowed just one more run.

The Rockies lone run came in the sixth when Fowler tripled (his 14th of the season) and later scored on a wild pitch. Otherwise the bats were mostly silent against Carpenter. At least it was a decent pitcher this time. At any rate, since the team's out of contention and we can focus on individual achievements, I'm happy to note that Fowler's triple broke a three way tie with Matt Holliday and Brad Hawpe for sixth place on the Rockies all time list, and he is now tied with Ellis Burks in fifth with 24. Neifi Perez's club leading 49 should be safe until 2012. 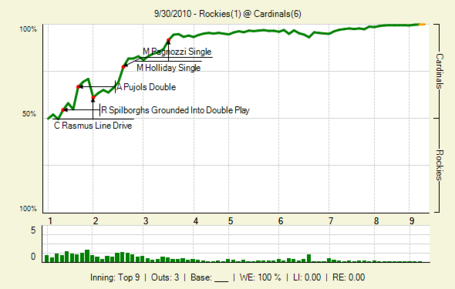