All year I've been waiting patiently for the San Diego Padres to wake up and realize that they weren't good enough to win the NL West. Finally, it appears that they have, as they dropped their ninth straight game. Admittedly, San Diego is still probably going to win the division, as they do still have a 2.5 game cushion on the Giants (pending tonight's result), but the point is that I couldn't shake the feeling that despite their strong Pythagorean record the Padres were playing well above their talent level. It warms the cockles of my cold black heart to see the results finally match my highly-biased perception. Let's hope that the Rockies can take advantage of it (5.5 GB in the division).

With a semi-national spotlight on him, Carlos Gonzalez continued his reign of terror on NL pitching with a 3-4 day with two doubles, a steal (his 21st), and two runs batted in. He led a Rockies offensive attack that despite striking out 15 times recorded ten hits and walked five times CarGo raised his average to .335 with his efforts and his RBI total to 95. Meanwhile, Jason Hammel went 6.1 IP, allowing only two runs on six hits while striking out three to get the win (10-7, 4.25).

San Diego began the scoring with an Adrian Gonzalez double in the first, but Colorado struck back with a two-run single by Todd Helton in the third and then added to the lead in the fifth when former Rockies farmhand Everth Cabrera bobbled a bases-loaded, two out ground ball. The Padres came back with a seventh inning double off of Hammel by Nick Hundley.

It was a tense situation, the Rockies clinging to a tenuous 3-2 lead in the seventh with the bases full of Padres and Gritty Fan Favorite David Eckstein up, but Esmil Rogers came in and struck him out on a filthy breaking pitch to preserve the lead. Gonzalez smacked a two run double as part of a three run eighth while Matt Reynolds and Manny Delcarmen pitched clean innings to close out the game for the Rockies.

The Rockies will go for a crucial road sweep tomorrow with Jorge De La Rosa on the mound, opposed by San Diego with Clayton Richard. 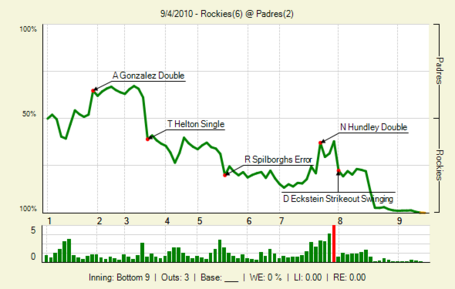