Excuse me while I chortle.

After 125 games of winning close games with good base-running, shutdown bullpen work and clutch hitting, the Padres have fallen from grace in a hard way, being beaten the same way in which they posted victories for five months.

Carlos Gonzalez broke a 2-2 tie in the seventh inning with a "frustrating" broken bat blooper.  Troy Tulowitzki walked, and the due completed a double steal.  With the infield drawn in, Melvin Mora punched a single past David Eckstein.  Tulowitzki was able to get a good jump off second with the drawn in infield and scored as Ryan Ludwick's throw skipped past Nick Hundley.

It is exactly the type of inning that pushed San Diego to lead the division, and after a ten game losing streak, the division title we all surrendered to them two weeks ago is in a more perilous spot than I was on Fall River Road today.

That offensive output came against the bullpen, after Colorado successful beat starter Clayton Richard for nine hits in six innings over 100 pitches.

Jorge de la Rosa pitched effectively through six innings for the win, allowing eight baserunners and striking out four.  He was pulled for a pinch-hitter in the seventh inning with the bases loaded.  His only blemish on the scoreboard came on a two-run home run from Miguel Tejada.

Troy Tulowitzki hit a solo home run to put Colorado the lead, then doubled the headstart with an RBI groundout an inning later.

Matt Belisle returned to hit dominant form, retiring all six batters he faced on 22 pitches, and Huston Street recorded his fifteenth save after a Tejada bunt single.

Carlos Gonzalez went 3-for-5 to extend his hitting streak to 13 games, nine of which are multi-hit games.  While his power has been surging, his three hits today came on a broken bat blooper, ground ball up the middle and a bunt.

Gonzalez leads the NL batting race by 16 points and went 12-for-24 with one home run, three doubles, one triple, three walks and three stolen bases in the last two road series in San Francisco and San Diego.  He has a hit in all but six road games since the All-Star Break.  Coors creation WUT?

With the win, the Rockies are now just 4.5 games out of first place in the NL West division.  Colorado heads home for a 4-game set against the Cincinnati Reds, while the Padres wait for the Dodgers to spar at Petco.  San Diego should be able to break their losing streak in a Mat Latos/Carlos Monasterios matchup tomorrow.  The Giants are facing the Dodgers right now on ESPN, with Jonathan Sanchez facing Hiroki Kuroda. 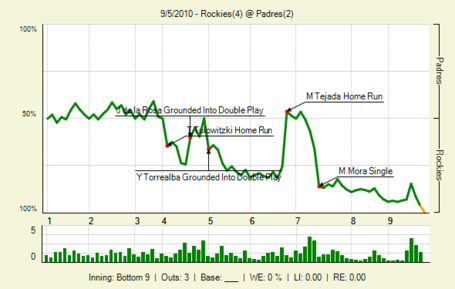