It took Ubaldo Jimenez his sixth start since winning his 17th game to win his 18th game. Things didn't look good for Jimenez after the third inning when he allowed four runs, but we've learned (I hope) to never give up on the Rockies. So how did the team respond? Jimenez drew a walk to start things and then moved over to third on an Eric Young Jr. double. Dexter Fowler walked to load the bases.Our Triple Crown chaser, Carlos Gonzalez, unleashed a two-run double, and then Troy Tulowitzki tripled in CarGo and Dex. Game tied at four. Reds starter Aaron Harang was chased out of the game after Todd Helton drew a walk.

Two innings later, Troy Tulowitzki hit a homer, his 15th, to give the Rockies a 5-4 lead. The Rockies continued scoring when lefty Aroldis Chapman entered the sixth inning with two outs and two men on. Eric Young Jr. singled in Seth Smith to score the first run of the inning. The next two scored on a throwing error by SS Paul Janish, allowing Chris Nelson to score, and a passed ball by catcher Ryan Hanigan. Miguel Olivo and Ryan Spilborghs topped off the scoring with an RBI double and an RBI single, respectively, in the seventh.

Jimenez, for his part, allowed four runs (all in the third), went six innings, walked six, and struck out eight. His 18th win puts him alone in second place for wins in the majors behind CC. Sabathia's 19. U-Ball now holds the Rockies' franchise record for most wins in a season.

The Reds wound up using six relievers after Harang failed to escape the third inning. 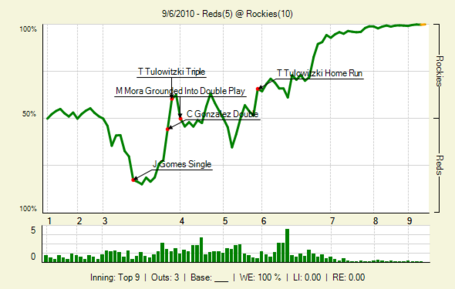