Rockies 4, Reds 3: A laser and a well-oiled machine prove to be the recipe for another Rockies winner

Share All sharing options for: Rockies 4, Reds 3: A laser and a well-oiled machine prove to be the recipe for another Rockies winner

Behind a three-run home run from Carlos Gonzalez and a well-pitched game by rookie starter Jhoulys Chacin, the Rockies reeled off their fifth consecutive victory and now find themselves ten games above .500 for the first time since losing to Cincinnati in their first game following the All-Star break.

After Eric Young Jr. and Dexter Fowler (each of whom had two hits) set the table with consecutive singles, CarGo drove a fastball on the outer half of the plate over the wall in left field to put the Rox up 3-0 on Johnny Cueto. It was his 32nd homer of the season to go along with 100 RBIs. The Reds got within a run after Melvin Mora was tardy in trying to force Joey Votto out at third instead of going to first to get the out on a Ramon Hernandez ground ball, and Drew Stubbs cashed in with a two-run single. Miguel Olivo, who had three hits on the evening, doubled in Seth Smith to put Colorado back up by two but was thrown out at third trying to stretch it into a triple. Jonny Gomes homered off of Rafael Betancourt in the eighth to make it a one-run game again, but the Reds were unable to get anything else off of Raffy and Huston Street, who earned his 16th save.

Jhoulys Chacin was quite solid in six innings, allowing two runs on six hits while striking out five. Matt Belisle tossed a scoreless seventh that was aided by a double play. Betancourt struck out two in his inning of work, despite giving up the homer.

More stuff after the jump... 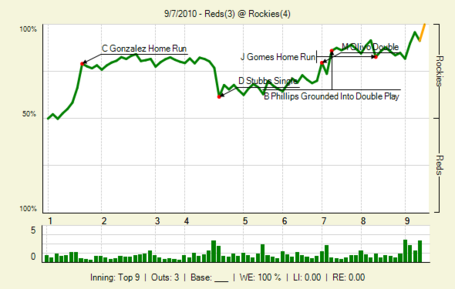