Tonight's Rockies victory contained a bit of everything: rip-roaring fun on offense, solid pitching, a precautionary injury removal from the game, and a major league debut.

Despite a first inning hiccup for Aaron Cook, when he allowed a Joey Votto RBI single, this game was smooth sailing for the Rockies. Johnny Herrera struck first in the second inning with a two-run single, but Troy Tulowitzki dropped the hammer down the next inning when he unleashed a three-run homer to left field. Tulo was not done for the night, however. He led off the fifth inning with a solo homer to left, his 17th of the season. Two batters later, Seth Smith hit his 17th homer of the season too. Eric Young Jr. closed out the scoring with a two-run single to center field.

Back to Aaron Cook now. He threw 1-2-3 innings in three of the next four frames. And in that non-1-2-3 inning, he got a pitcher's best friend with runners on base: a double play! In the sixth inning Joey Votto hit a ball up the middle that hit Aaron Cook on the leg. He went down, but after a little while he walked off the field mostly on his own ability. Troy Renck tweets that Cook left with a "displaced right fibula fracture." He is likely done for the season.

Esmil Rogers allowed one run over the next two innings, and Manny Delcarmen relieved him in the eighth. He more or less did his job, inducing a double play after allowing a single and then getting a fly out after a walk. Samuel Deduno pitched a 1-2-3 inning, watching Yonder Alonso strike out to end the game.

Michael McKenry made his major league debut as a pinch-hitter for Esmil Rogers. He flied out to center field. 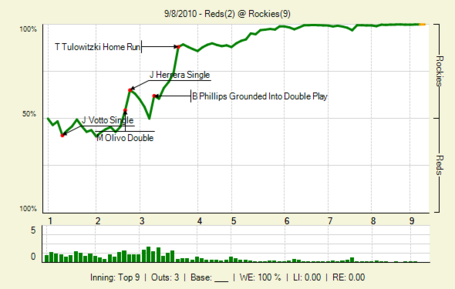