The Colorado Rockies fought back from an early 5-0 deficit, finally taking a lead on a dramatic eighth inning steal of home by rookie Chris Nelson, to sweep the Cincinnati Reds with a 6-5 victory on Thursday. Nelson was put in as a pinch runner for Jason Giambi after the first baseman drew a walk following a game tying Troy Tulowitzki home run. Nelson advanced to third on an error when Joey Votto made a poor flip to Nick Masset covering first on a Melvin Mora grounder. The Reds mental breakdown continued as Masset then allowed Nelson the lead he needed to swipe his first MLB base, home plate at Coors, for the Rockies win.

Giambi started the Rockies comeback with a two run home run off Reds starter Travis Wood in the bottom of the fourth. The Rockies kept chipping away after that, Dexter Fowler doubled in Eric Young the following inning, and Ryan Spilborghs (walk,) Chris Iannetta (double,) and  Jonathan Herrera (RBI grounder) combined for the Rockies fourth run.

Jason Hammel gave up the five early runs (one scored in the first, four in the second) thanks to some poor defense and wild pitching, but showed the same kind of resiliency that the team did in sticking out seven innings. His effectiveness for the remainder of his start allowed the Rockies to claw back.

Matt Belisle picked up the win by pitching a scoreless eighth, and Huston Street struck out three of the four batters he faced in the ninth to pick up the save.

The Rockies now have a 41-28 record against teams with a .500 or better record, equal to Philadelphia for tops in the National League.

The Rockies will find themselves a little closer to one of those two teams ahead of them tomorrow after tonight's Giants-Padres game. 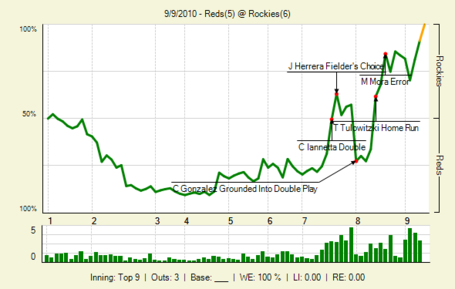