Welcome to a special edition of Rockaholics Anonymous! In this session, I analyze the time of the year known as the offseason.

The offseason: noun 1. The other 5-6 months of the year in which Rockaholics begin showing symptoms of withdrawal, including but not limited to: temporary physical and mental illness, strange (stranger than normal) behavior, and severe separation anxiety. 2. The most horrible time of the year.

Any normal purple-blooded Rockaholic hates the offseason. It’s awful torture. What the heck are you supposed to do for six months anyways? You mean I actually have to do my homework in the evenings?

During the season, we get so spoiled. We’re so spoiled as baseball fans anyways, with there being 162 guaranteed Rockies games to follow. Every so often, there is a Crestfallen off day and the treacherous three days in July known as the All-Star break to remind us what living with baseball is like, but seriously, 180 days without baseball is enough to make one go mad- and it does.

You’re doing perfectly fine one fall day, just loving the Rockies, then it ends- just like that- and the offseason hits you coldly in the face. The radio gets unplugged, for there’s no real use for it otherwise, and then you sit there in your chair that you use to watch/listen to the games on with this empty, lonely feeling for a few days. The chair gets covered with laundry and other junk. You then try to distract yourself with other things, like other sports or work, with a lot of deadlines. You hope all the deadlines will make the 180 days go by quicker without making you lose your sanity, because deadlines always come and sneak up on you too quick. Then you wait. And wait. 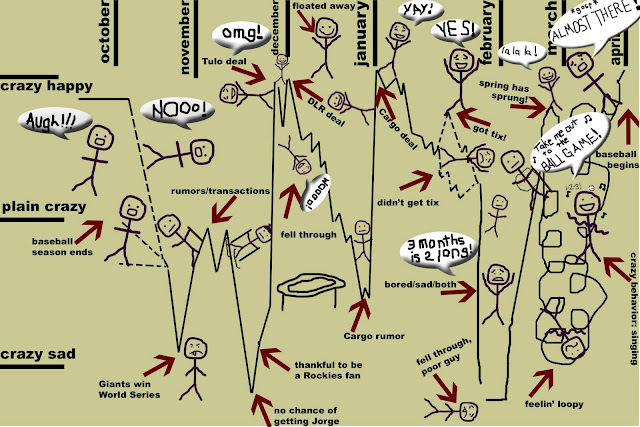 The black line is the path that we take during the offseason, while the dotted lines signify different possible paths. The little spikes are rumors or transactions, and the big mountains are other things that make us really happy. The purple stick figures are us, of course.

In a year in which we do not make the playoffs, the offseason consumes half of the year, starting in October and ending in April. We spend half the year wishing it was the other half. It is what makes us half of what we are, and by looking at the graph, it is usually not a pretty site. Pathetic. That’s what it is.

Right after baseball season ends is when we experience the initial withdrawal symptoms. It becomes really difficult to adjust to not having a game to look forward to during the day. We go from "Woo, yeah, baseball!" to having it all taken away. Just dumping us into the offseason and making us go without baseball just like that is cruel: there should be some sort of reverse Spring Training that weans us off of it. After the cliff jump of no Rockies baseball, we might turn to the playoffs to satisfy our thirst, but after the World Series is over, there is absolutely no baseball to be seen for four and a half months. Needless to say, that is a long time.

I suppose the bears and the other animals that might happen to be Rockies fans go and hibernate until spring (lucky animals), but us humans have to survive the winter by reliving the past season, counting down the days and looking forward to next season, and following whatever offseason rumors and transactions the Rockies are involved in. Last offseason, for example, was long and dreary. Reliving the ninth inning of the last game was torture, and as for offseason moves, there were hardly any. But this offseason, we’ve had the benefit of a lot of highlights to rewatch and saved newspapers to read. As shown on the graph, the transactions were pretty exciting, especially the ones that came out of nowhere. (And don’t worry: the trampoline at the bottom of the spike sprung up the stick figure that fell through after the Tulo deal, and the one that floated away has landed safely.) As awesome and happy some of the deals make us feel, the effect of an up-and-down rollercoaster is not good for our mental health or heart. But we really don’t care…until the dead of winter hits.

It is no accident that January is depicted as the longest month, for it really does take forever to end. They should consider either switching January and February so January has fewer days, or starting Spring Training in January. In November and December, you’ve learned to live without baseball for a while, but in January, you’ve just had enough of this offseason rubbish!  Even the ones with the most company become lonely, the busiest are bored, and the best of the optimists are frequently depressed.

One way to remedy this is to buy Opening Day tickets: holding tickets in your hand is a sure sign that spring is almost here, and planning what you’re going to wear and how you’re going to do your hair for Opening Day is a nice distraction (yes, I really do this). But if you are unsuccessful, you may become even sadder. The only other hope is keeping your eye on the first day of baseball season, and then pretty soon Pitchers and Catchers report will creep up on you.

When the first day of spring is finally reached in the middle of February, the worst is finally over. The exhibition games in Spring Training are as much for the fans as they are for the players. It’s awesome that they give us fake baseball games to take the edge off, and fun to pretend they’re real as you’re sitting in front of your heater drinking lemonade and eating hotdogs. But I’ve been told that I act the worst during the final one and a half months of the offseason: it’s when I really go crazy. The loopiness (represented by the loops on the graph) includes symptoms of singing baseball songs, randomly blurting out highlight quotes, and cheering out of the blue. In this point of the offseason, the Rockaholic may go from extremely happy that the season is almost here, to horribly sad that it isn’t. Remember, being without baseball for almost six months does things to the mind.

Then there is the last mountain to climb until the first day of baseball season. You can’t wait for it, and try to imagine the fresh smell of grass and fried food at the stadium, or the feeling your heart has during a game. You know that it smells good, and that the feeling was awesome, but you can’t exactly remember it. It has been way, way too long.

Eventually the offseason ends, but until then we must walk a long road. The journey is hard and the mountains are high, but we have climbed them before, and know they will lead to baseball again. And then everything will be alright. 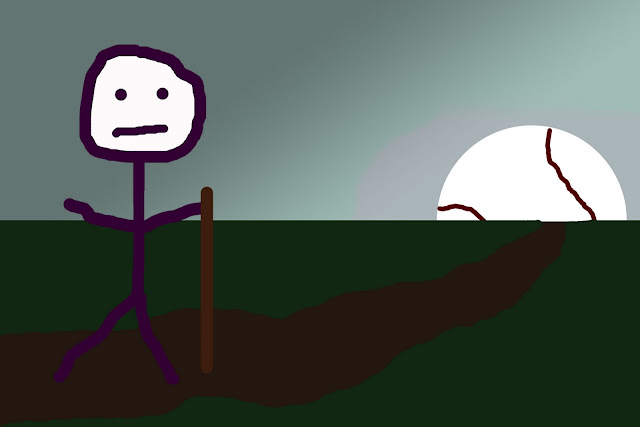 Keep the faith Rockaholics: spring is on the way.