It is time we give the Rangers some due.

Michael Young, who seemed more likely to be a Rockie than Ranger last December, became the first player in ALCS history with two extra base hits in one inning.  He hit two 2-run doubles down both lines in a nine run third inning, the biggest inning in the postseason since the 2002 ALCS.  If one counts a fielder's choice, twelve consecutive Rangers batted and found their way on base in the inning, as former Diamondbacks Max Scherzer and Daniel Schlereth imploded, followed by Rick Porcello.  Young drove in six on the night and hit a solo home run, becoming the only Ranger in the series not named Nelson Cruz to go yard.

Texas clobbered Detroit 15-5 in the clincher, eliminating all drama from an otherwise extremely dramatic MLB postseason.

I wasn't sure the Rangers had the starting pitching to defend their AL title.   Even as they celebrate, I'm not sure they had they starting pitching to defend the title.  While Texas took six games to dispatch of the Detroit Tigers, it was no thanks to their rotation, who posted a 6.59 ERA and averaged less than five innings per start in the series.  Tonight, starter Derek Holland lasted just 4.2 innings, allowing four runs on three home runs, to Miguel Cabrera, Jhonny Peralta and Austin Jackson.

The Rangers' offense overcame their pitching woes, scoring 39 runs in the six games.  Thirteen of those runs were driven in by ALCS MVP Nelson Cruz, who pretty much became a lock to make thousands of fantasy players look stupid next year as he hit yet another home run.  He hit home runs in five of the six games for six dingers total (his teammates hit one total) and went 8-for- 22 with two 11th inning grand slams.

The Rangers will face the winner of St. Louis and Milwaukee.  The Cardinals lead the Brewers 3-2 in the series with Shaun Marcum facing Edwin Jackson tomorrow night in Milwaukee in Game 6 at 6:05 MDT. 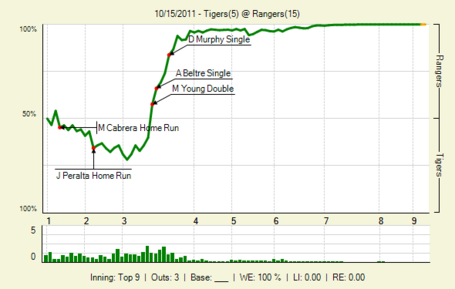