Matt Holliday knows a little something about being left for dead in September only to reach the World Series.  The St. Louis Cardinals know a little something about winning pennants.  After defeating the Milwaukee Brewers 12-6 tonight, the Cardinals have completed an improbable journey to their third league title in eight years, the most of any team in either league.  In fact, only the Yankees have appeared in the Fall Classic more than the Cardinals in the Wild Card era, and St. Louis' three titles since Albert Pujols' career commenced in 2001 is matched only by Jeter's club.

Six home runs were hit in tonight's clincher, one by Pujols in the third.  David Freese's three-run shot in the first inning chased Shaun Marcum after just one frame, and Rafael Furcal even hit one out.  Edwin Jackson wasn't good, as he allowed three home runs himself in two innings, but he was better than Marcum, whom the Brewers traded their top prospect for last offseason.

How did we get here?  Many fans and writers, myself included, wrote off the the Cardinals in February, when Adam Wainwright was pronounced out for the year.  Yet St. Louis overcame an average pitching staff with a horrendous bullpen to get here.

More fans and writers eliminated the Cardinals when Chris Carpenter, who needed to step up in Wainwright's absence, started 1-7 and carried a near-5.00 ERA through May.

Just six weeks ago, the Cardinals had less than 1 in 100 chance of being in the playoffs at all.  Even with two days left in the regular season, St. Louis' chances to be in the postseason were barely 1 in 4.  In all, they were part of a September story that had roughly 1 in a quarter million chance of occurring.

Once they reached the playoffs, there were more people picking their opponent to win the World Series than the Cardinals to win that round at all.  Then Chris Carpenter outpitched Roy Halladay in Philadelphia.

This was a team who was ridiculed for trading away Colby Rasmus for Edwin Jackson when their playoff odds were less than 50%.  Rasmus stumbled to a  .173/.201/.316 line in 140 plate appearances in Toronto.   St. Louis won 9 of Jackson's 13 regular season starts (including his last five), and three of the Cardinals' seven postseason wins came in Jackson starts.

Some eyebrows raised when St. Louis acquired Rafael Furcal to play shortstop, as his injury-riddled first half in Los Angeles yielded a paltry .197/.272/.248 line with one home run.  But in Cardinal red, Furcal turned it on, hitting .255/.316/.418 with seven longballs.

The narrative being written by many celebrates Tony La Russa's managerial moves, how he has a knack for pushing the right buttons.  I suppose that is true, but simply by pushing more buttons than any other manager, La Russa increases his chance of a hot streak.  To me, the Cardinals have rolled the dice and come up sevens.  A strong team is dangerous indeed when things roll their way.

So it will be the St. Louis Cardinals facing the Texas Rangers for the World Series title.  While pitching wins championships, these two teams are here because of their bats:

Texas' ability to pitch at a high level also, particularly with that reinforced bullpen with Mike Adams, Mike Gonzalez, Koji Uehara and Alexi Ogando will make the Rangers heavy favorites.  It will be an interesting series between two organizations that are not thought of in the elite class of baseball teams, yet their track record suggests perhaps they should be.

For fan reactions, visit the following: 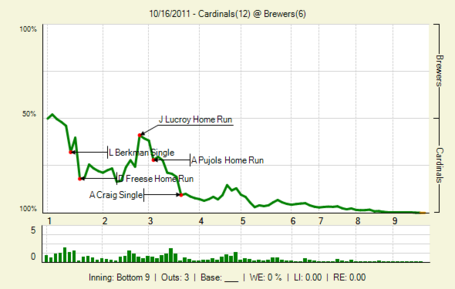