On a chilly night in St. Louis in which a comedy of errors took precedence early on, the Cardinals and Rangers turned up the heat late and provided all of us with a show that we won't soon forget. In the end, David Freese sent the hometown fans home in a frenzy with a walk-off home run off of Mark Lowe in the bottom of the 11th inning to give the casual baseball fan what they wanted to see - a World Series Game 7.

The Rangers came within a strike of winning their first ever world championship on two different occasions, due in large part to a host of mental and physical errors on the part of St. Louis. Matt Holliday and David Freese dropped easy pop flies, while Holliday compounded the mistake by falling asleep at third base and getting picked off by Napoli on a snap throw. Holliday is no stranger to head-scratching mistakes during the postseason, as he was picked off in a critical situation during the 2007 World Series while with the Rockies and allowed a would-be game-ending flyball to hit him in the nether regions in Los Angeles during the 2009 NLDS during his first season as a Cardinal. To make matters worse, Holliday was forced to leave the game after getting picked off due to a finger injury, which FOX somewhat-humorously referred to as a "severly bruised little finger."

Meanwhile, the Rangers had a few errors of their own to deal with, as Michael Young and Elvis Andrus each botched a couple of plays that resulted in runs for the Cardinals. The sloppy defense played by both teams was largely responsible for the back-and-forth nature of the game, in which there were a comined 12 - TWELVE - ties and lead-changes.

The real drama began to unfold in the bottom of the ninth inning, David Freese lined a two-out, two-strike,  game-tying two-run double over the head of Nelson Cruz. Before that at-bat, Neftali Feliz was 7-for-7 in postseason save opportunities. In the top half of the following inning, Josh Hamilton picked up his teammate by depositing a 98 mile-per-hour Jason Motte fastball into the seats in right-center field to put the Rangers ahead by two runs once again. However, as they had done all night, the Cardinals refused to give up. As Scott Feldman battled control issues, the Cards crept closer as Ryan Theriot's run scoring groundout cut the lead to one. Then, once again down to within one strike of winning it all, the Rangers failed to put St. Louis away yet again as Lance Berkman lined a single into centerfield to tie the ballgame.

Texas went away rather quietly in the top of the 11th, setting the stage for Freese to continue his storybook postseason with yet another HUGE hit.

Tonight's game was setting up to be truly an incredible ending to what was arguably the best World Series we've seen since 2002. Now, with the way tonight's game played out, and with a Game 7 on the horizon, it has a chance to be one of the best we've seen period.

Win probability graph and other notes after the jump... 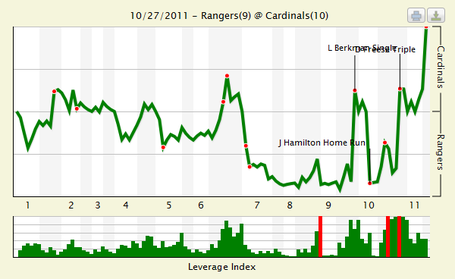 Odds and Ends: Adrian Beltre and Nelson Cruz hit back-to-back home runs in the top of the seventh inning...Cruz's homer tied the all-time MLB record for most home runs in a single postseason (8 - Barry Bonds, Carlos Beltran)...The Cardinals became the first team in World Series history to rally from two-run deficits in the ninth and tenth innings...David Freese's walk-off HR was the first in a World Series Game 6 since the infamous Joe Carter homer in the 1993 Fall Classic...Freese now has 19 RBI this postseason, which is tied for the all-time record (Sandy Alomar, David Ortiz, Scott Spiezio).