The Florida Marlins cease to exist today.  They won't be contracted, as has been scpeculated several times in the past two decades.  Rather, today, they become the Miami Marlins.  At 7pm MST tonight, the change takes place, as well as an unveiling of the organization's new uniforms for the first time.  We do not know what they will look like.  The mockups that have been published all over the internet were fan-created and are not accurate.  We do know the colors will involve black, orange, blue, green and/or yellow.

Absent from that color scheme is the primary color of the past 19 years:  teal.  The Diamondbacks overhauled their teal and purple for sedona red and sand, mercifully.  The Devil Rays graduated from their strange rainbow green monstrosity to a more classic navy.  That leaves the Rockies as the lone expansion team in the last three decades that has not completely overhauled their color scheme. 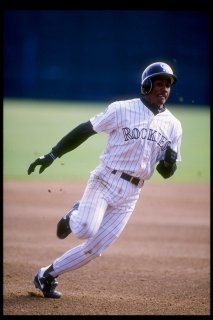 In fact, the home and road uniforms in 1993 are more or less identical to the ones used today, with purple pinstripes being added to the road greys.  See to the right, where Nelson Liriano is rounding third base in 1993.  Current and expansion comparisons for the other three expansion teams since 1980 yield unrecognizable matches.  Include all 14 expansion teams of the last 50 years, and the Colorado is the only franchise to keep their home/road uniform colors, text and logos consistent.

Oh sure, the Rockies have dabbled in alternates that have become successful if not classic.  The purple tunics and black vests have gotten a lot of play in the last decade, but as far as the home and roads, we've been looking at the same uniforms by and large.

It is a testament to the foresight to avoid the vogue teal in 1993 that the uniforms are more timeless. More so, it is an extension to the prevailing organizational philosophy in the front office.  Be conservative, smart and don't take any risks.  The Marlins and Diamondbacks went for broke and won World Series.  The Rays overhauled their image and won a division title in the AL East.

Should the Rockies overhaul their uniforms?  Obviously, the answer is no.  I don't think even a World Series championship is enough to soothe the wounds of watching a team in teal.

Pujols, Marlins to meet " MLB.com's On the Beat  At least they are doing their best to drum up support for the franchise.

Rockies entering 20th year of quest for long-term answer at second base | ColoradoRockies.com: News  The only homegrown second baseman to play more than 45 games in Colorado is Clint Barmes.

Rockies catcher Wilin Rosario excels in the Dominican Winter League | ColoradoRockies.com: News  A lot of positive things are being said about Rosario.