No one really knows what the Rockies' Opening Day roster will look like - we just know it will be a lot different than it used to. It isn't apparent what Dan O'Dowd's ultimate plan is, but it clearly transpires in two acts. Act One: make like Kevin Towers and eliminate as much dead weight on the roster as possible. Act Two: acquire talent.

We are essentially at intermission, and it is too late to rewrite Act One. O'Dowd has leapt off the diving board and has peaked his dive - now we must wait to see if his descent is a belly-flop or an artfully constructed entry into the 2012 season with confidence. While Act Two's successful completion is critical to fielding a contending team, Act One will play a large part as well. 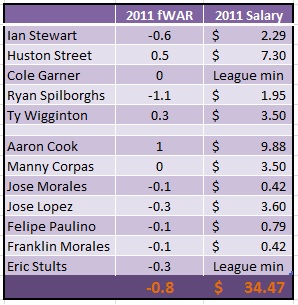 As shown to the right, the Rockies have disposed of several players who either were paid a lot to be mediocre at best, or were outright terrible. Five players have been traded or non-tendered this off-season. Seven more have been traded, released, or allowed to leave in free agency since last Opening Day. Those 12 players took up almost $35million in payroll space (42% of the 2011 payroll) and delivered a total of -0.8 fWAR.

So Act One of Dan O'Dowd's plan is clear. Cut the fat. Eliminate those players weighing down payroll and winning percentages. It doesn't mean O'Dowd now has $35million to play with, obviously. Raises to Tulo, Cargo, Fowler, Smith, Belisle etc. eat up a good chunk, but there is some money. It is very important for O'Dowd to use that newfound flexibility wisely, or jumping off the diving board would have been a bad idea in the first place.

Or as Troy Renck put it:

The Rockies' winter thus far has created financial flexibility and options. The next step is to maximize them.

I'll get more into what is on the table on that front in a bit, but notably, the Rockies non-tendered Ryan Spilborghs and Cole Garner last night. With all the frustration hurtled at Aaron Cook, Felipe Paulino, Huston Street and Ty Wigginton, no one seemed to notice that Ryan Spilborghs was really hurting the team. In fact, Spilborghs ranked 663rd out of 670 MLB players in fWAR in 2011 with -1.1. That was better only than Chone Figgins, Orlando Cabrera, Raul Ibanez, Tsuyoshi Nishioka, Bill Hall, Felix Pie and Adam Dunn.

We all love Ryan Spilborghs. He had some great moments as a Rockie. While most came off the field, he had his moments on the field. He had four career 2-home-run games. He had a .384 wOBA in 2008. But Ryan Spilborghs has declined, hard. We as fans need to be either committed to winning without him or losing with him - sadly, his play has dicatated no other options. The angst from fans at losing such a personality is understandable, but if we want to see the playoffs, Spilborghs needed to at least be a replacement player to get a free ride as a clubhouse novelty item, and he was nowhere close.

Spilborghs may return to Colorado, though the Phillies are interested, forever and ever. If he does return, it will be at a much lower salary, even a minor league contract. I don't feel too bad for Spilly. He played parts of seven seasons in Colorado, made over $4million and contributed 2.6 fWAR. He's done fine for himself. I do, however, feel bad for Cole Garner.

Drafted in the 26th round in 2003, Garner has been a part of the Rockies' organization for almost nine years. He fought through struggles with switch hitting, nagging injuries and generally being forgotten on the farm. He persisted after poor years and hit continually at upper levels. He re-signed with Colorado after the 2009 season despite earning minor league free agency, then wasn't awarded any major league time in 2010, although Colorado needed an outfielder, and his stats were the best in the Springs. He got nine big league at-bats in 2011, but he only played in 46 games in the minors due to injury. He just wasn't on the Rockies' radar, but by all accounts, he was one of the most quality young men in in the organization and worked hard for years to get to this point. I wish him luck breaking through with another organization, and with his health.

Later in the day, Jim Bowden reported the Rockies have not made an offer for Cuddyer.

Lindsay Guentzel tweeted that the Twins are holding firm at a 3-year $26million contract for Cuddyer and will not increase their offer. For the Rockies to lure Cuddyer away from Minnesota, it would seem to take at least $2-3million more, at which point, Cuddyer is looking less like a good buy. If Minnesota gets Cuddyer, the Rockies could then be competing against the Indians for Josh Willingham.

Mike Devereaux has been hired to be the new Asheville Tourists hitting coach. Devereaux played over 1000 games in 12 seasons for the Orioles, Dodgers, Braves, Rangers and White Sox. He had a career OPS+ of 91 and slugged 105 home runs, making him a better hitter than almost every MLB hitting coach, the Rockies' coach excepted. Devereaux was a field coach in the Orioles system.

Ramon Hernandez officially Rockies' new catcher | On the Rox — Colorado Rockies news — Denver Post It's official, not that it was ever in doubt. Ramon Hernandez' contract was officially announced and finalized.

John Rocker Admits Steroid Use During Career - Baseball Nation Is this the least shocking story you never even thought about?

Rockies have trade interest in Boston's Marco Scutaro - Hardball Talk - With the cost of Martin Prado remaining prohibitively high, perhaps for good, O'Dowd is considering the former Red Sox shortstop. At the right price, he'd be a great stable option for second base.

National League Non-Tenders: MLB Rumors - MLBTradeRumors.com Among the other non-tenders last night was Jeff Keppinger from the Giants. He isn't great defensively and doesn't have much power, but he fits the second base hole, experience and contact skills the Rockies seem to be stressing this offseason.