Share All sharing options for: Saturday Rockpile: Rockies Looking for Pitching, But Apparently Not Very Hard

According to Jon Morosi, the Rockies continue to seek another starting pitcher, but are not looking seriously at two of the best candidates for their situation, Hiroki Kuroda and Joe Saunders.

Look, I know very well that Kuroda is probably a long shot, considering all indications are that he won't want to come here even if the Rockies offered comparable money to that of teams like the Dodgers or Diamondbacks. However, it appears that they're not even going to try at this point, as the team apparently believes his camp's asking price is too high. As for Saunders, his overall numbers aren't great (and haven't been since 2008, when he posted a 131 ERA+, but he had a good year last year in the NL West and his groundball tendencies certainly are a fit for what the Rox are generally looking for. That said, he's starting to generate some interest among other teams, and the Rockies are never too excited to get into bidding wars.

As far as free agent pitchers are concerned, all that's left after that is Edwin Jackson, a guy who has had a league-average or better season (in terms of ERA+) in four out of the past six. Granted, he was less-than-stellar in his last NL West stint (82 ERA+ with the D-Backs in 2010), but he's only 28 years old, and fits the profile of the innings-eater that the Rox so desperately want/need. Problem is, Scott Boras will likely command something similar to what John Danks received from the White Sox - something in the 5-year, $65 million range. You and I both know the Rockies won't get involved with that.

So, where do the Rox go from here? Surprise trade? Sitting on their hands just hoping somebody (Jhoulys Chacin, we're looking at you, bud) already in-house steps up and hurls 220 effective innings? One thing is for sure - the Rox need to step up their game if they want to have any chance of landing the kind of pitcher they need (and are supposedly looking for).

Krieger: Only fair to give Rockies some props in Hall voting - Denver Post

Dave Krieger says he'll take it upon himself to try and keep Vinny Castilla on the HOF ballot for another year, as he's going to vote for the former Colorado third baseman this year. Castilla has no business being in the Hall, and the same can be said for other former Rockies who have been on the ballot but did not receive enough votes to stay there (Dante Bichette, Ellis Burks, Andres Galarraga). However, as I've said before, I firmly believe that Larry Walker does indeed belong, as his career 142 wRC+ (including no season below 100 following his rookie campaign) would suggest. Let's hope Larry receives more votes than he did last year and starts to make a steady climb toward 75%.

For those of you weirdos who love this kind of stuff like I do, it appears that after a few months of rumors, the Rox will indeed be sporting new uniforms on the road for 2012. And, with my excellent sports merchandise-searching skills, I think I have found a preliminary version of the new get-ups: 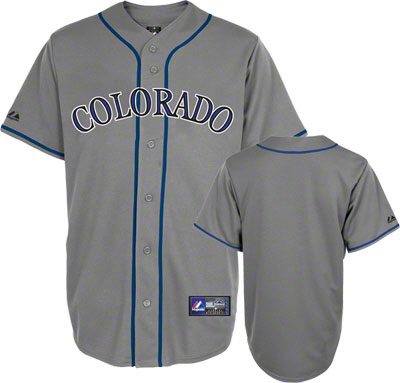 Assuming the piping ends up being more purple than blue, this is a good look for the Rox. It's very similar to their road jersey from the early days, though those ones had 'ROCKIES' across the chest rather than 'COLORADO.'