Yesterday, I reviewed Ian Stewart's history as a top overall prospect, examined his home/road splits, batted ball profile, patience skills and even his work ethic.  If you missed it, make sure you check it out here.  Today, I'll be addressing just two topics regarding Stewart; however, through my research, I would suggest these two are probably the most important in terms of Stewart taking that big step forward.

I don't play many video games:  the only ones I have time for anymore are baseball related.  Last summer, I created a power hitting third baseman for the Minnesota Twins on MLB 2k10.   The character unanimously won the Rookie of the Year Award by hitting over 50 home runs.  He also struck out over 250 times.

My issue was two strike hitting.  In gameplay, I patiently waited for a fat pitch to use my power swing on, and when I got it, the ball was walloped.  The problem was, many times I did not get that pitch.  There would quickly be a two strike count and I would wave hopelessly at a pitcher's pitch for strike three.

I guess you could say I created another Mark Reynolds, but that also applies to Ian Stewart.

All the way across the board, Ian Stewart hits like Albert Pujols, as long as there is less than two strikes.  Once the pitcher reaches two strikes, the at-bat is practically over.  Of course, every hitter is better in more favorable counts.  That is why sOPS+ is helpful.  It compares Stewart's results to the MLB average OPS+ in each split.

So what is the take home message here, other than that fans can probably afford to go get a beer once Stew reaches two strikes?  Can it be as easy as swinging early in the count?  Well, of course not.  His very good results with less than two strikes come on from pouncing on those fat pitches.  Simply swinging at a tough 1-0 tailing fastball won't help.  It could be that Stewart simply is and always will be just a mistake hitter.  It could be that's just who he has been.

Hitters of Stewart's power-first profile cannot magically become good two strike hitters ie Todd Helton, but it is worth mentioning that he was not half bad in 2008.  It has appeared to me that Stewart's long swing has gotten a bit longer since 2008, and he has shown little to no effort to shorten his swing with two strikes, instead still hoping for a mistake.  Hey, I understand the mindset.  I still do it on MLB2k10.  It's hard to pass up a beautiful home run in favor of soft single.

To recap, Stewart had an OPS of just .328 with two strikes last season.  For comparison, Jeff Francis has a career OPS of .340.  In 53% of his at-bats, the count reached two strikes.   You can not afford to turn into a light-hitting pitcher every time two strikes are on you.  Stewart absolutely has to learn to shorten his swing and defend better with two strikes.  If not, he will continue to give away too many at-bats.  As he gives away at-bats, the pressure only increases to do more damage in the next at-bat.

On Opening Day in 2010, I sat alone in a bar in Wheatland, Wyoming, intently watching every detail of 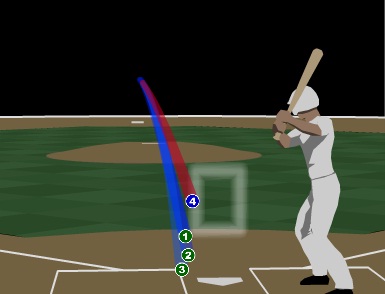 That crowded stance allowed Stewart to easily reach pitches on the outside portion of the plate, and when Gallardo gave in with a 3-0 fastball on the outside corner, the pitch came directly into Stewart's wheelhouse.  That home run excited a lot of Rockies fans.

It probably isn't surprising that his second home run, the next day, was also on the outside corner.  Stewart burst out to a .386 wOBA in April, and the long-awaited breakout seemed to have arrived.  As we know, clubs adjusted and Stewart's production went down.

It certainly seemed as if Stewart took too many strikes on the inside corner as a result of his stance.  I am not one to be satisfied with evaluating the game of baseball solely with my eyes, so I sought the help of the very talented Jeff Zimmerman to back up my perceptions.  And he did. 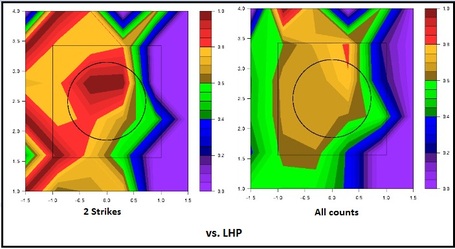 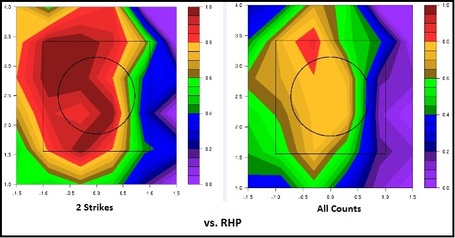 Pretty, huh?  These are strike zone heat maps, essentially showing the percentage of pitches in a given zone that Stewart swung at in 2010 based on their location.  Each plot is taken from the catcher's point-of-view, with the inside corner for Stewart on the right.

There is a great danger in attempting to extract too fine of conclusions from these, which are generated from a small sample of data.  There is one trend that I want to bring your attention to though, a trend which carries over through all four plots.

Without the reference of the strike zone square, one would presume that the actual strike zone is a good six inches to the left of where it actually is.  Stewart swung at a good number of outside pitches....yet there is a dead space on the inner quarter of the strike zone.  That dead space existed in totality, with no correlation to pitch count or pitcher handedness.

I think our hypothesis is proven, here.  Ian Stewart more or less left alone one quarter of the strike zone in 2010, leaving a very large weak spot for pitchers to exploit.  The benefit of reaching outside pitches was far outweighed by weakness he created on inside pitches.  For him to take a large stride statistically in 2011, he will need to back off the plate.  While this change did not happen at all last season, new/old hitting coach Carney Lansford quickly jumped on this change this offseason:

He worked out with new hitting instructor Carney Lansford in North Carolina to get a head start before spring training. He has moved off the plate - too often last year he took inside strikes.

You are correct, Mr. Renck.

Check back in at tomorrow for the conclusion of this three part series.