On Wednesday, we went over several aspects of Ian Stewart's game.  Yesterday, I overviewed two of the most important changes Ian Stewart (known as Kobe to his teammates) can make for 2011:  moving his stance away from the plate, and improving his two strike approach (and/or being more aggressive early in the count).  If you have yet to read through both of those, I encourage you to do so before moving on.

Today, I will be discussing the last two aspects of Ian Stewart's game that I have deemed notable:  his lefty/righty splits, and his ability to use the whole field.

"Nowhere in his scouting or statistical background does it indicate that Stewart would struggle versus lefty pitchers...As the story goes, Stewart grew up taking batting practice against his southpaw father, and he has carried that into his professional career. In 2007 at Colorado Springs, he hit southpaws at a .316 clip with a .547 slugging percentage in 117 at-bats." - Brendan Roberts, ESPN - March 3, 2010

Remember when we were excited that we had a young lefty slugger who could legitimately hit left-handed pitching?  That was quite an exciting prospect.  Suddenly, that ability has gone by the wayside a bit in recent years, and Stewart seems to be in danger of becoming a platooned third basemen with the likes of Melvin Mora and Ty Wigginton.  But should he be?

It is true that he has been a much less valuable asset vs. southpaws in the last two seasons, but an sOPS+ near 100 is not something worth truly worrying about.  In fact, that is the level in which he would benefit from the repetition of continued plate appearances vs. left-handed pitchers.  Given Jim Tracy's affinity for platoons, it is important that Stewart hits lefties well out of the gate in 2011, or the opportunity for that repetition will soon be gone.

So why has Stewart's lefty splits fallen off?  One possibility is Garrett Atkins.  While enjoying a strong season in 2008, Atkins started against all difficult left-handed pitchers.  As Atkins fell off in 2009, Stewart was pressed in to duty against more difficult lefty pitching.  I do not like this answer; it does not bode well for the future.  Hopefully it is something else.

Without scrutinizing Pitch/fx data, let me pose a different hypothesis:

Paramount in successful hitting against left-handed pitching as a left-handed hitter is the ability to hit the ball to the opposite field.  If a hitter cannot do so, a steady dose of breaking pitches down and away turn into strikeouts and weakly pulled ground ball outs.   The issue is only aggravated with a batting stance too close to home plate.  One might think being close to the plate would allow for better results against outside breaking pitches, but even pitches that are actually well outside the strike zone appear pull-worthy.  Just like that, the opposite field approach is shot.

So how did "Kobe" do at distributing the ball around the field against left-handed pitching?  Incredibly poorly.  I do not have the data of batted ball placement splits, but the Katron tool gives us plenty to play with.  For those unfamiliar, Katron was the tool Justin Bopp utilized to create this pretty spray chart.  Katron is park-specific, so without manually overlaying several plots, we can only view hits at one park at a time.  In this case, let us see Stewart's hits vs. southpaws at Coors Field in 2010: 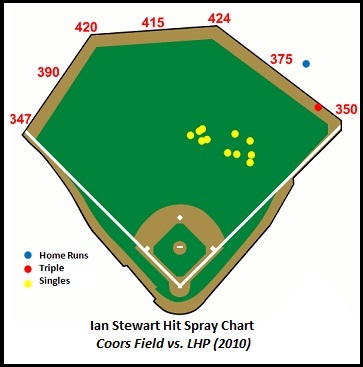 Overall, Ian Stewart had three hits against left-handed pitching that landed on the left-field side of second base in 2010, all on the road.  One was a weak ground ball through the SS-3B hole against Nate Robertson on July 20.  One was a textbook line drive to left-center vs. Johan Santana on August 12.  And one was his home run to almost dead center field off Randy Wolf on April 6.

It is tough to have success against left-handed pitching when you are trying to pull the ball all the time.  (Duh?)  It is a strange issue for Stewart to have, as he was never regarded as a platoon candidate as a prospect, and he exhibited great success going the other way earlier in his career.

That doesn't sound like the Ian Stewart we saw much of last season.  Even when considering his at-bats vs right-handed pitching, Stewart was still very pull-happy.  Check out his overall spray chart at Coors Field in 2010: 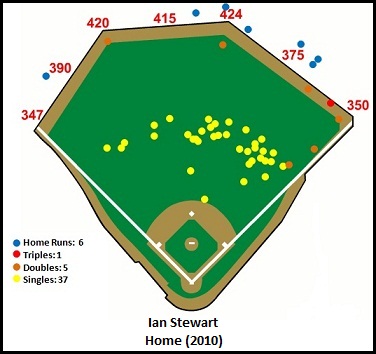 That is still very pull heavy.

Most hitters find their best success when hitting the ball the other way, and Stewart is no different.  The limitations of Katron and my own knowledge of other systems prevent me from getting a really great picture, but that axiom can still be seen if we massage the data correctly.

Let's use small sample size data slices to our advantage with Katron.  We can overlay Katron spray charts from several parks manually, allowing for the isolation of data.  What if we took the five road ballparks Stewart struggled at the most?  The Rockies' third baseman hit particularly poorly at Petco Park, Wrigley Field, Busch Stadium, AT&T Park and Chase Field in 2010.  Note: This data IS taken from the road parks, but it is overlain over Coors Field for reference. 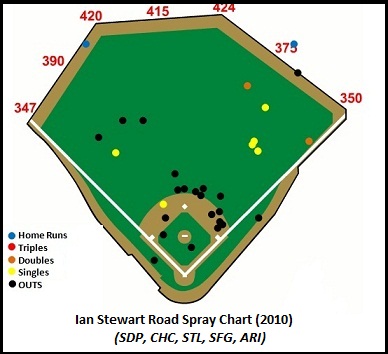 So it looks like very few hits to the opposite field and an awful lot of outs on the pull side of the infield.  That's the trademark sign of a hitter trying to pull everything.  No wonder he didn't have very good success in those road series.

If that axiom of finding success by hitting the ball the other way is correct, we would expect a more evenly distributed spray chart at parks where his road stats are the best.  Stewart hit well at Turner Field, Citi Field, Nationals Park, Dodger Stadium and Miller Park: 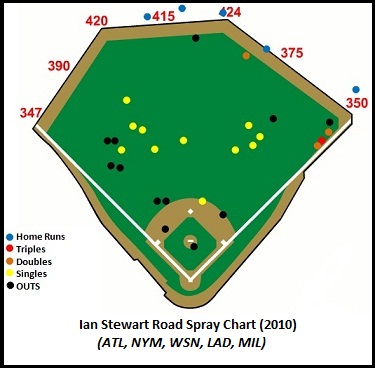 Now that looks like effective hitting.  There are 16 balls on the pull side, 15 on the opposite field side.  He only turned over one ball and pulled it on the infield.  Clearly, he was locked in when hitting at those parks.

These past two charts are good illustrations of how hitting the other way brings more success.  Of course, I must point out they hardly prove causation.  The implied correlation is incredibly strong though.

Over the past three days, I have illustrated more aspects to Ian Stewart's game than you probably have ever even thought about.  He has undeniable strengths in fan interaction, patience, hitting line drives and hitting away from Coors Field.  He has developed strong weaknesses in his batting stance and two-strike approach, has gotten pull-happy and has become inconsistent against left-handed pitching.

So will Ian Stewart fix this?  What exactly does he need to do?

First and foremost, Stewart needs to step away from the plate a bit.  This will dramatically improve his plate coverage.

"He worked out with new hitting instructor Carney Lansford in North Carolina to get a head start before spring training. He has moved off the plate." - Troy Renck, 1/29/11

Moving further away from home plate will allow him to cover the inside third of home plate much better than he did in 2010, but it will prevent him from reaching pitches on the outside corner as easily.  This means he will need to improve even more on hitting the ball the other way than he ordinarily would have.

"He said pretty much since I've been in the big leagues, that's one of the things that's kind of haunted me -- I've gotten pull-conscious and haven't used the whole field like I did in the Minor Leagues. So he wanted me to back off the plate and really work on hitting the ball the other way and getting the confidence back -- that I can hit the ball that way."  via Thomas Harding, 1/29/11

Huh.  Sounds like Carney Lansford knows exactly what he is doing.  There is always debate about how much impact a hitting coach can have.  After all, he isn't the one swinging the bat.  Yet there are undoubtedly certain tweaks to an approach that can unlock monster results.  Just look at Troy Tulowitzki since changing his stance.  Boom.

Obviously, not all stance changes bring positive results.  I think I have set a good case that, in this case, it will.  Moreover, Stewart actually has to execute the preachings of Coach Lansford.  That might not be so easy.  But if he really has skewed away from the formula that helped him post silly offensive numbers in the minors, there is reason for optimism.

As I pointed out Wednesday, Stewart has been a popular pick for a breakout candidate every season of his career.  I had not bought in after 2008.  With his uberprospect past, it was assumed he would "figure it out" and blossom, but I had never seen anything on the field (or off) to suggest the next season would be any different.  In researching for this article, I fully expected to come to the same conclusion this offseason.

Yet Stewart has been doing some very good things on the field in his career in spite of having some major weaknesses in his approach.  His line drive percentage is fantastic.  His walk rate is strong.  He boasts exceptional power.  The consistency has just not been there due to the weaknesses in his approach.  Aside from his two strike hitting (which would improve as a byproduct of hitting the opposite way), Carney Lansford is having Stewart focus directly and solely on those greatest weaknesses which have plagued him.

If Stewart executes the fixes he is working on, he will hit .280 with 40 home runs this season.

I owe significant thanks to Jeff Zimmerman, Justin Bopp and Ian Stewart for their assistance in completing this analysis.  Also, thank you Bryan, for allowing me to steal the player review you initially claimed.