Monday Rockpile: News from the Rockies Spring Training - Sort of

Share All sharing options for: Monday Rockpile: News from the Rockies Spring Training - Sort of

Welcome to the most frustrating week of the year for fans hungry for Rockies news. Basically the stuff coming down on the pipe looks like this:

Troy Tulowitzki has arrived at camp.

Fan group A: EEEEEEE TULO! HE ARRIVED! HE'S THERE! I LOVE JUST READING HIS NAME!

Fan group C: The Avalanche just traded Kevin Shattenkirk and Chris Stewart! How can you care about Spring Training nonsense at a time like this?!

Fan group A: OMG FEELS GREAT! HE'S GONNA REPEAT 2010 AND DO EVEN BETTER! CY YOUNG FOR SURE WITH 27 WINS!

Fan group C: Carmelo Anthony is on the verge of being traded - this is MUCH bigger news than Ubaldo throwing, it's not like he was hurt or anything!

Fan group C: Bahhhhhh Stewie and Shatty both have a million points in StL already - GAHHHH WHY DID COLORADO MAKE THAT TRADE

Fan group A: AHHH HE'S GONNA HAVE A BREAKOUT SEASON! 40 STEALS AND HE'S GONNA BE THE BEST LEADOFF HITTER EVER! I LOVE HIS SMILE! I MISSED HIM SO MUCH! JUST CHILLIN WITH TODD!

Fan group B: Ok...are they gonna play or something soon?

Fan group C: First start in Ottawa, and Craig Anderson is stopping shutouts. Great. Is it baseball season yet? ...oh, it is, isn't it. Well ok then. 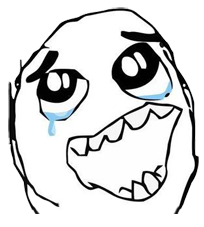 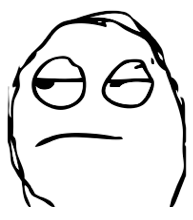 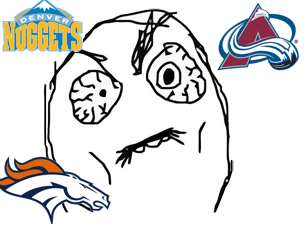 Fact is that there's nothing really WRONG with being part of any of those groups. It's all an issue of timing. Some fans have just been itching for baseball season so bad that any mention of the Rockies sends them into frothing hysteria - I envy that excitement sometimes. These people are to be admired and feared. Some fans just want the game back so they can start watching baseball and put money where mouths are. The others just want Denver Sports to do well in general, and while they realize that the Rockies are the best bet to be the most successful of the major Denver sports franchises, they also follow other leagues and are being driven up the wall right now because big doin's are afoot.

I personally identify with group B - I'm certainly excited that baseball's back, but I don't want to run out of excitement steam come mid-August. Tulo shows up to camp, I'm kind of just "meh, it's not like he wasn't going to". I'm actually more disappointed with Joe Crede NOT showing up to camp than I am with players showing up. I mean, come on, I wrote up all of those Joe Crede fun facts about his glove stopping toxic waste dumping and him being the 6th Planeteer or something.

As it stands, it's gonna be another week before there's anything to report, and even then, it'll be some exhibition scrimmages and eventually a Game. Actually, I should be knocking on wood and saying that no news is good news, because I've broken baseball before with my stupid Rockpiles.

A few links, still nothing mindblowing.

Newstabulous has their NL West preview up. Some short snippets of things we already know, but the important part is that they have the Rockies picked to win the division.

Jay Payton retired just a few days back, and Brian Gadd of the Zanesville Times Recorder has a nice piece about how Payton wants to give back after a decent MLB career. Payton cites family, teachers, and coaches as sources of inspiration and encouragement. Payton wants to spend time getting involved with his hometown and communities where he spends a lot of his time. If Payton was one of your favorites, it looks like you picked a good one.

If you listen to today's Purple Row Radio, we talk a bit about Hector Gomez - admittedly in somewhat vague terms, and well-deserved. It's hard to decide how to view Gomez, given his injury-ridden career in the minors yet high billing. Jack Etkin of Inside The Rockies talks about Rich Dauer's evaluation of Gomez, and while they praise Gomez' potential at the plate, his range at SS is something they just can't say enough about. The guy can get to a lot of batted balls. I really, really hope he can stay healthy, because looking at a middle infield which includes Troy Tulowitzki and some combination of Chris Nelson, Hector Gomez, and who knows, maybe even Eric Young Jr makes me downright excited.

First game's a week away, so let's ALL get excited!