The San Francisco Giants were a very good team in 2010, and that helped them win the World Series.  As every baseball analyst and fan outside of the bay area has noted over the last three months, the Giants also benefited from a good bit of luck.  There is nothing wrong or disrespectful with that correct proclamation.  The best team in MLB is almost never the most talented and well put together squad but the one who best fuses their talent with a favorable roll of the dice.

The Giants' good fortune came from two categories that are widely presumed to be unrepeatable:  impeccable team health, and an above average ratio of breakout/career/bounceback years.

Tim Lincecum, Matt Cain, Barry Zito, Jonathan Sanchez, Madison Bumgarner, Brian Wilson and Aubrey Huff combined to miss a total of zero games in 2010.  That is their entire rotation, closer and most valuable hitter.  San Francisco was truly putting their best foot forward.  Maybe there is a legitimate reason for significantly strong health.  Probably not.

Thirty-one year old Andres Torres inexplicably produced a 6.0 fWAR season after generating just 0.9 in his career 2002-09.  Aubrey Huff improved by 7.1 fWAR over 2009.  Pat Burrell improved by 3.0 fWAR over 2009 in less at-bats.  We all know about Cody Ross' ridiculous October.

For all of these reasons, we expect the Giants to fall back among regular civilians in the NL West in 2011.  It's certainly a reasonable expectation, especially since Brian Sabean did nothing but to swap Juan Uribe for Miguel Tejada on the roster.

One thing is getting ignored though.  There are two types of regression, both to the mean.  We have only been focusing on regression back down to the mean, when there is a significant area where regressing to the mean will help San Francisco.

A year ago, the Giants were coming off a season with one of the worst offenses in MLB.  There was no one in that line-up who could do damage outside....Pablo Sandoval.  The Giant hero went from All-Star caliber third baseman at age 22 to benched on San Francisco's title run.  I wrote of his fall from grace in September.

Sandoval has quite a bit of potential to improve on his 2010, absorbing some of the injury/peak season regression we are likely-but-not-guaranteed to see with the Giants in 2011.  Is there any reason to expect Pablo Sandoval to be a different man in 2011? 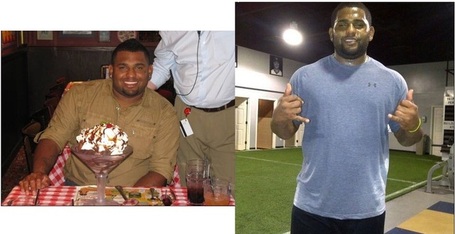 The photo on the left is from November.  The one from the right is from just two weeks ago.  According to Sergio Romo, "he looks thirty pounds lighter.  This guy wants it."

His journey did not end two weeks ago, as ever slimmer pictures of the Panda continue to surface.

While inundated with endless stories of players "in the best shape of their life," it has to be completely true with Sandoval.

It is impossible to be conclusive.  Losing weight doesn't always help players, but in Sandoval's case, it has to.   Listed at  5'11" 262, it shouldn't be shocking that Sandoval's body was unable to keep up with the grind of a full season.

In 2009, Sandoval played in 153 games and had 633 plate appearances, all of which he carried the load of the Giants' offense.  He fell apart in 2010, likely in part due to scouting reports, BABIP regression, but also perhaps due to his body being unable to keep up with the demands of an MLB season.

The health issue is certainly reason to expect some bounceback from Sandoval in 2011, but the newfound motivation and pride the Panda is exhibiting is likely to rub off on the rest of his game as well.

If he can re-find his form from 2009, the Giants won't need impeccable health or an MVP caliber season from Aubrey Huff to be threats in the NL West.  If there's one thing Rockies fans don't need, it is Kung Fu Panda making a comeback.  It is likely that is exactly what we will get.

Programming note:  The NL West Report will run on Fridays this season.