Share All sharing options for: Monday Rockpile: The Big Game

Hey, did everyone watch the Superbowl yesterday? That was a hell of a win, wasn't it? It looks like they just wanted it more than the other guys. Despite those questionable calls by the officiating staff, I think they really pulled it out.

The real story about yesterday's game is the atrocious halftime show. When did entertainment and popular music divorce? Who got the visitation rights? Discuss it more in the OT.

Seriously though, I'm going to take the coward's way out, despite promising MondoGarage an article about WAR, large, longterm contracts and franchise cornerpieces. Let's talk about the top 5 biggest wins of the 2010 season.

Oh you all know what this one is. 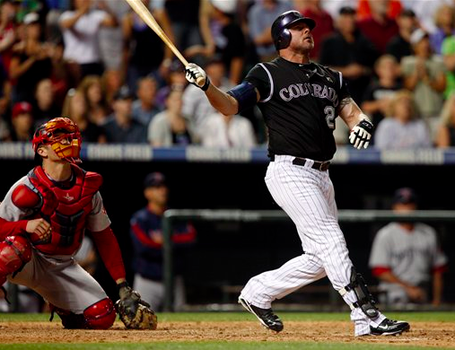 6-6 tie, bottom of the 9th, Clint Barmes at 2B, and Jason Giambi comes to the plate.

What's surprising about this game is that the highest individual WPA for this game wasn't even Giambi - although Giambi was the hero. Entering the inning, Jonathan Papelbon was coming in for the save on a 6-5 lead. Stewart pounded the 2nd pitch deep over the RF fence. Giambi just sealed the deal. While Giambi's .288 WPA was certainly excellent, given 1 whole plate appearance, Stewart's .424 WPA made the bigger difference.

This was the huge game that everyone missed because it was a day game. The Rockies posted a 4-run comeback from a 8-10 deficit in the 8th inning to win the game 12-10.

Check out this 8th:

Seth Smith strikes out (1 out)

Chris Iannetta walks on a 3-2 count

Melvin Mora singles on a grounder up the middle, Iannetta to 2B

Eric Young Jr grounds into a fielder's choice, Mora out at 2B, Iannetta to 3B (2 out)

Dexter Fowler walks, Young to 2B

Belisle pitched a 1-2-3 9th to seal the deal. Gonzalez had the highest individual WPA, .300. His 8th inning single was the highest WPA play of the game, worth .362 - funny how WPA works, Gonzalez was 2-for-4 on the day with a BB and a double.

Once again, a huge inning from both Ian Stewart and Jason Giambi. Giambi singled off of Ryan Webb in the 7th to shave a 5-8 deficit to a 6-8 deficit. With 2 guys on base and Luke Gregerson in to pitch, Miguel Olivo walked (weird), Brad Hawpe struck out, and then Ian Stewart brought the pain with a deep line drive blast to LF - who says the man can't go oppo?

This was my dad's birthday, and the Rockies definitely pitched in for a pretty solid present. Down 3-9 in the 9th inning, the Rockies did the following:

Melvin Mora singles, Olivo to 3B

Ryan Franklin comes in to pitch

Brad Hawpe grounds out, Fowler to 3B

Despite Smith's heroics, Giambi's PH single was a .460 WPA play as compared to Smith's .352 WPA. The trend we're seeing is clearly that the tying run is worth more than the actual walkoff.

This was the game where Troy Tulowitzki just won the day. Tulo notched a .944 WPA all by himself.

The Tulo show started in the 2nd with a walk behind a Carlos Gonzalez single. Both Cargo and Tulo scored on an ensuing Melvin Mora double (+.020 WPA).

Tulo's 3rd AB was a bit bigger than a walk or a lineout:

Gonzalez chased Zito the play before with an RBI Triple that drove in Jay Payton. Chris Ray was laid upon the Tulowitzki altar (+.180 WPA).

Finally, the bottom of the 10th inning. Brian Wilson is still pitching, the score is still tied at 9. Clint Barmes strikes out to begin the inning. Gonzalez hits a weak infield single to 2B. Tulowitzki then doubles to LF on a grounder to drive Gonzalez (who was running on the pitch) in, giving the Rockies a 10-9 victory (.351 WPA).

What made this game so awesome was the fact that the season was over, essentially, the Giants were 0.5 games back to the Padres in the NL West, the whole Humidor = cheating nonsense was still lingering, and it just felt good to stick it to San Francisco, especially Brian Wilson. Of course, the Rockies proceeded to build on this momentum and lose every game the rest of the season, but for one final moment, it gave Rockies fans hope.

Tulo's .944 WPA led the Rockies. Payton was the next highest at .130 WPA. It was a hell of a game in a hell of a season for Troy Tulowitzki.