For the fourth time in as many games this series, the Rockies jumped out to an early first inning lead. For the third time in four games, it helped propel them to victory, this time by the margin of 6-5. This lead was thanks to a two out rally fueled by a Seth Smith RBI single and followed by a Jose Lopez (playing 3B) three run bomb to left to make it 4-0 after one frame.

Two out rallies were the theme of the game for Colorado, who survived a Pirates rally that saw them take a 5-4 lead into the seventh inning. However, with two out and nobody on, Dexter Fowler dribbled a single to left and stole second, Jonathan Herrera (whose crazy OBP skills are beginning to win me over) walked again (one of three for him in the game), and Jason Giambi singled Fowler in to tie the score. Then Pirates reliever Mike Crotta (0-1) got wild, walking Troy Tulowitzki and Smith to push across the go-ahead run.

Jhoulys Chacin struggled with his command today, going 6 innings and allowing 5 runs (4 earned) on 7 hits and 2 walks, with 3 strikeouts. However, Chacin got the win (2-0) thanks to some nice run support and a fine effort by the bullpen, as Felipe Paulino, Matt Reynolds, Matt Lindstrom, and Huston Street held Pittsburgh scoreless over the last three innings. Street recorded his 4th save with a 1-2-3 ninth.

With the win, the Rockies moved to 6-2 on the season and 3-1 on the road overall. Let's hope that this early road success is a common theme in 2011.

Pittsburgh's starter, James McDonald, settled down well after a rough first inning, allowing only one run in his last 5.2 IP (on the Giambi single). The Pirates were the beneficiaries of two Rockies errors today (including one resulting from the Ty Wigginton Outfield Experience), but weren't able to fight their way back after Colorado re-took the lead.


Graph and Rowcall after the fold. 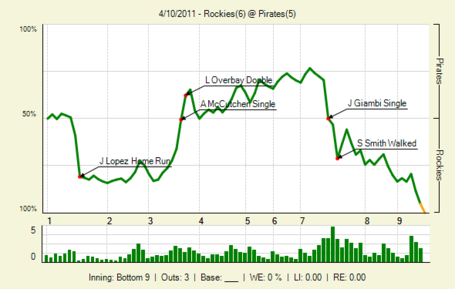 Rowbot Roll Call: You had lots to say today.