Share All sharing options for: Monday Pebble Report: All Hail the Sky Sox

Billy Buckner pitched 4 innings, struck out 4, walked 2, gave up 2 runs. Bruce Billings pitched 2 innings, gave up 2 hits, punched out 2. Sean White, Rex Brothers, and Alan Johnson finished the last 2 innings to give the Sky Sox a resounding series split in Colorado Springs. The Sky Sox bullpen allowed a total of 5 baserunners during the final 5 innings of the game. Oh, and just so you know, Willy Taveras hit a home run and Cole Garner went 4-for-5. In fact, the only position players who DIDN'T get a hit were Eric Young Jr, who walked twice and stole a base and Jeff Salazar who popped out as a PH.

Rob Scahill got hit around a little during his start, going 5.1 IP, allowing 3 runs, 3 walks, 3 punchouts. Sean Jarrett gave up the 2-0 lead by allowing 3 inherited runners from Scahill and then 2 runs of his own in the 6th. The Drillers pulled to within 2 on a Ben Paulsen solo shot, but the real story was the 9th.

Bronson Sardihna grounded out to begin the inning, followed by a Warren Schaefer double. James Cesario struck out, but reached on a dropped third strike, advancing Schaefer to 3B. Tim Wheeler singled, scoring Schaefer, advancing Cesario to 3B.

(that's right, click past the jump, it's totally worth your while) 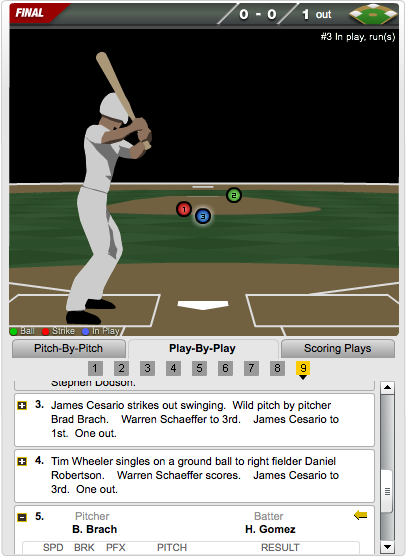 Hector Gomez laced a ...well, whatever it was, it was right down the middle. And now it's somewhere in the Gulf of Mexico.

Despite 5 innings of 3-hit baseball, the Nuts' bats were unable to back the pitching staff up, being 4-hit by Ryan Doolittle and the Ports' pitching staff. Alan DeRatt pitched 2.2 innings, punching out 4, and Michael Marbry wrapped it up with 1.1 innings with a punchout.

Josh Hungerman pitched 3.2 innings, allowed 2 runs, 2 hits, 2 walks, and 2 strikeouts. Helder Velazquez continues his .700 tear by notching one of the Tourists' 4 hits on the night.