In yet another game this week, the Rockies overcame an early deficit on the road. Greg Reynolds, whose start today is likely his last for the MLB club for some time, matched Mets knuckleballer R.A. Dickey's success for the first three innings, only to encounter some trouble in the fourth. A sloppy inning, including a walk to Ike Davis and a wild pitch allowing David Wright to advance after doubling to lead off the inning, allowed New York to plate two runs.

The Rockies began their midgame surge of offense in the fifth when Jose Morales scored on a Seth Smith groundout. Things continued in the sixth when J. Morales doubled in Ian Stewart and Jason Giambi, his first hit of the season with limited playing time. In the sixth, Carlos Gonzalez finally knocked a ball over the wall for the first time this season, a two run shot that also scored Smith. Troy Tulowitzki followed with another home run, taking the run count to 6. Tulowitzki was 3-4 on the day with a walk.

Following G. Reynolds in relief was Franklin Morales, who led off the inning with a walk but then produced a double play. On a Willie Harris grounder to Giambi at first base, F. Morales' ankle was injured in an unusual play where Harris stepped on it while Franklin was covering the base. Matt Belisle entered the game, who would stay in the game for the next two innings, helping save some of the bullpen for Game Two. Belisle allowed a Jose Reyes home run, lessening the lead to three runs, but was otherwise effective. Matt Reynolds got the final out of the eighth.

Jim Tracy tabbed the heavily worked Huston Street to once again pitch the ninth, now that it was a save situation. After a quick first out and a walk to Harris, Rockies nemesis Scott Hairston took Street deep to cut the lead to one. Josh Thole singled to bring the winning run to the plate in pinch hitter Carlos Beltran, who also followed with a single. With Street clearly not in top form and having thrown 30 pitches, Matt Lindstrom was brought in to finish the inning. Reyes hit a ground ball to second base, advancing pinch runner Chin-lung Hu to third base as Jose Lopez elected to make the out at 2B. After battling control problems for the next two batters, the ugly ninth inning ended in favor of the Rockies as David Wright flew out to Smith.

Greg Reynolds got the win, his first decision since 2008. He was rewarded for his win with a demotion to make room for Alan Johnson on the 25 man roster. Such is life; when Ubaldo Jimenez is coming back to your team, room must be made.

Game wrap for Game Two as well as the roll calls after the jump. 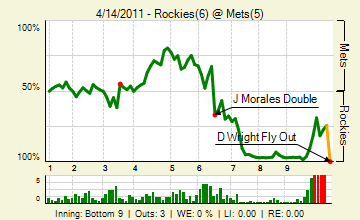 In all four games, the Rockies came from behind at least once to overcome a Mets lead.

The Mets got started earlier this time with a two run double from backup catcher Mike Nickeas in the second inning, bringing around Ike Davis and Scott Hairston. The Rockies retaliated in the top of the third when Chris Iannetta, who doubled, was brought home by a Dexter Fowler single. After a Jonathan Herrera single moved Fowler to third, Carlos Gonzalez grounded into a force out allowing Fowler to score and tie the game.

Jorge De La Rosa failed to contain the Mets again in the fourth inning, as Jose Reyes, who had been struggling with runners in scoring position, singled in two more runs with a ball that slid just between middle infielders Troy Tulowitzki and Jonathan Herrera.

Come the sixth, Troy Tulowitzki hit yet another home run, making it seven on the year. The Rockies would tie again as De La Rosa grounded out with one out on the inning, and a fumble by second baseman Brad Emaus on the feed to Reyes at shortstop prevented the double play. The Rockies took the lead on the next batter with Dexter Fowler singling in Ryan Spilborghs, marking the end of the day for Mets starter Chris Capuano.

Then Jonathan Herrera hit a 3 run home run off of Taylor Buchholz. Yeah.

After a miscommunication between Todd Helton and Iannetta allowed Hairston to advance to second on a barely fair infield popup to lead off the sixth for New York (the only Mets baserunner to reach between the 4th inning and game completion), De La Rosa managed to keep the pest from scoring despite allowing him to third base on a wild pitch.

De La Rosa's game would end with two outs in the seventh after giving up a walk to David Wright. Matt Reynolds, the only Rockies pitcher to appear in both games, came in and retired Carlos Beltran to end the seventh and Ike Davis to start the eighth. Rafael Betancourt finished the inning.

After the Rockies scratched another run off of New York closer Francisco Rodriguez (who hadn't had a chance to appear in the series before this), Felipe Paulino finished the ninth cleanly, and the Rockies picked up their 10th win in 12 games to start 2011. 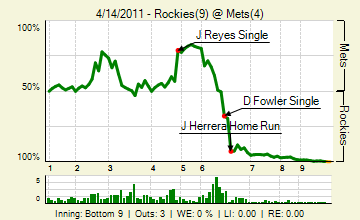