With the exception of Aramis Ramirez' 3-for-4 night, Chacin tamed the Chicago hitters in the form of 13 ground outs to 4 flyouts along with 7 strikeouts. Chacin only allowed 8 baserunners on the night in the form of 6 hits and 2 walks. Chacin threw 200 pitches, all of them for strikes. ALL OF THEM.

Really, this game can be boiled down to 2 things: Chacin owning faces, and Iannetta owning faces. In the 2nd inning with Matt Garza on the hill, Troy Tulowitzki singled, Todd Helton singled (one of his 2 hits on the night - he's batting .364 after that), Seth Smith walked, Jose Lopez struck out, and then Chris Iannetta lined a triple over the head of Marlon Byrd to clear the bases, and then he scored on a comical relay throw to 3B from Starlin Castro that flew directly into the Cubs' dugout. Helton singled in Johnny Herrera in the 5th to add to the lead, but it was entirely unnecessary. But awesome still.

Seriously speaking, Chacin tossed 114 pitches, 76 for strikes, and looked really, really good. At no point did he look like he was losing control of the game. I know I'm throwing the word a lot, but Chacin has been doing nothing but instilling confidence in the Coors Faithful.

@TroyRenck Chacin has not allowed a run at home this season...Last yr didn't throw changeup to RHP... now throws pitch in any count to anyone

I tell this to anyone who asks me about Chacin, but when he was in the minors, his changeup was likened to Johan Santana's. It showed tonight. EVERYONE (except Ramirez) was geting eaten up by that thing.

Stuff past the jump. 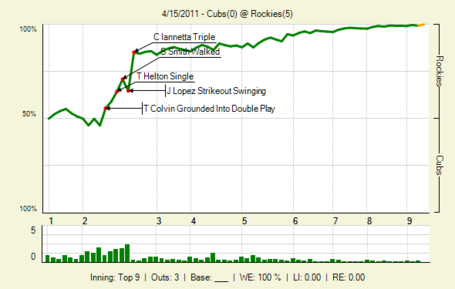 Rockies who kind of got their faces owned: