Rockies Back on Track with 9-5 Win Over the Cubs

Share All sharing options for: Rockies Back on Track with 9-5 Win Over the Cubs

With runners on second and third and two men out in the bottom of the eighth inning, my heart was sinking as I sat 20 rows up behind the Rockies dugout. After all, Colorado had gotten two men in scoring position in the 5-5 game with nobody out but then Jose Morales and pinch-hitter Ty Wigginton (not Giambi?!?) struck out. The situation smacked of yesteryear -- specifically, last year.

Gloriously, my pessimism was unfounded as the Rockies pounded out three straight two-out, run-scoring hits off Marcos Mateo to pull away from the pesky Cubs and avoid losing their first series of the year. Dexter Fowler's two-run double was the big one, obviously, and it sent a number of Cubs fans around me heading to the exits. Hold your head up high Cubs fans -- at least you get cheap tacos tomorrow. Oh, and a Ubaldo bobblehead if you showed up early enough.

Speaking of the crowd, I was satisfied by the Rockies-Cubs fan ratio, much more so than I thought I would be. Those denizens of Chicago behaved themselves pretty well as a substantial minority. I heard a number of Rockies fans say "who is this guy" when Alan Johnson was announced and...well, small sample size and all, but Alan Johnson is not a big league-caliber pitcher. He went 4 IP with 5 runs allowed (4 earned) on six hits, striking out and walking three each. Let's just say that I'm okay with this being Johnson's only start with Colorado.

After the Cubs pushed one across in the first (and they scored in each of Johnson's four innings), the Rockies retook the lead with a vengeance on RBI hits by Carlos Gonzalez, Todd Helton, and a two-run shot by Seth Smith. Smith also added a double and a run scored in the fourth before leaving the game with a tight left groin.

Matt Belisle allowed what seemed like a bunch of baserunners over two interminable (the whole game seemed interminable at times) but scoreless innings of relief, while Matt Reynolds and Rafael Betancourt (1-0) followed suit. Huston Street got the last three outs -- the final out of which was an outstanding diving stop of a liner by Jose Lopez at third.

With the win the Rockies move to 12-3 and are 4-0-1 in their 5 series so far this year. The graph and the rowcall after the jump. 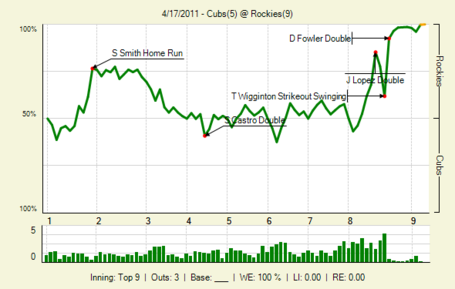