The Rockies purposely left the first inning assortment of balls outside of the humidor to give the San Francisco Giants false hope, and the Giants responded by putting up five runs in the first frame against Esmil Rogers on their way to an 8-1 spanking of the team that still holds baseball's best record, despite the defeat.

Tim Lincecum ensured the Giants would hold the lead by using the humidor'd ball assortment to hold the Rockies hitless into the seventh inning, in which Carlos Gonzalez would break up the no-no by lathering (thanks, Drew Goodman) a ball into right field. He would eventually come around to score on the first of two Todd Helton doubles on the evening, ruining Timmy's bid for a shutout. Lincecum still finished with 10 strikeouts in 7.2 innings while giving up just three hits.

Rogers, meanwhile, allowed back-to-back homeruns to Pat Burrell (a 3-run shot) and Nate Schierholtz (who unleashed one about 675 feet into the upper deck) in the first inning, and another blast to Freddy Sanchez in the second (as well as a close call off the bat of Aubrey Huff that fell into the glove of Ryan Spilborghs, who was terrible in his own right tonight). Prior to those bombs, Esmil had the longest streak of holding opposing batters without a homerun in baseball. Rogers' final line: eight runs on six hits and two walks in three innings.

The obvious positive to take from tonight's contest (other than Helton, I suppose) was the outing of Clay Mortensen, who pitched six scoreless innings of relief while allowing just two hits - doing his part to not only allow his team to at least try to get back into the game, but also taking a load off of what is a somewhat taxed bullpen. He walked two and struck out just one, but his sinker was definitely on - as the 11-to-1 groundout-to-flyout ratio would indicate. 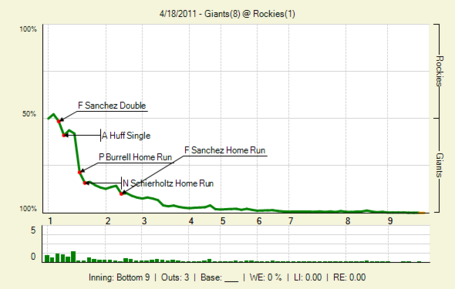 I have somewhat of a dislike for the Giants. But, tomorrow marks the return of Ubaldo, so we shall all rejoice!