Rusty Jimenez is a decent pitcher.  He has five to six pitches, can throw in the middle nineties and strike guys out.  He's much better than Enjurd Jimenez, who we saw on April 1.  But Rusty Jimenez is fallible, as we saw in the first inning tonight.

Rusty reached 96mph in the first inning, a very positive sign.  But his fastball was flat and up in the zone, and the Giants tallied four runs on four hits in the initial frame.  The dictionary definition of deja vu played out at Coors Field, as for the second night in a row, San Francisco led 4-0 after one on the strength of a Sanchez opposite field hit in a pitcher's count, a weak looping single and a monster 3-run home run by the five-hole hitter.

In time, Rusty Jimenez slowly showed flashes of turning back into Ubaldo Jimenez.  His fastball command never fully returned, but with Chris Iannetta calling for breaking pitches consistently, Ubaldo tossed four scoreless innings to finish his night.  He punctuated it with a strikeout of Pablo Sandoval on three fastballs 95mph or higher.  Ubaldo left after five innings, striking out six (five more than Opening Day) and walking just one.

That's the good news.  Ubaldo Jimenez looks close to returning to form.  You can see him through Rusty's wig, peeking out shyly and unsure.  The bad news is that the Giants wasted no time in jumping on Ubaldo's alterego, and the Rockies didn't have much of a chance after the top of the first for the second consecutive day against a division rival.

Jonathan Sanchez struggled with wildness all night, putting the Rockies in several hitters' counts, but Colorado did not take advantage of it.  Dexter Fowler doubled to lead off the first and doubled in two runs in the seventh.  A Ty Wigginton single was the only other hit for the Rockies in the game.  Wigginton also walked twice and scored both times.

Troy Tulowitzki and Carlos Gonzalez both went hitless, dropping them to 1-for-16 combined in the series.  The only hit was CarGo's single to break up Tim Lincecum's no-hitter.

With the loss tonight, Colorado lost their first series of the season, becoming the last MLB team to do so.  They can jump back to a three game lead in the division with a win tomorrow. 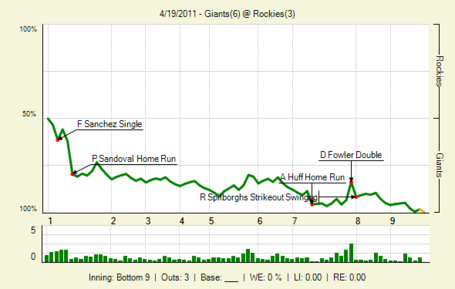