Needing at least some sort of statement after getting tossed about like a rag doll in the first two games of the series against the Giants, the Rockies salvaged some pride on Wednesday afternoon by roughing up Matt Cain and beating the Giants 10-2.

The Rockies got to Cain pretty early. In the bottom of the second, Troy Tulowitzki led off with the first of two doubles and after Todd Helton was hit by a pitch, scored on a Seth Smith single. The next batter, Ty Wigginton, would push three more runs across with a blast to left field, and the Rockies were off and running. Tulowitzki would finish with three hits and three runs scored on the afternoon, Smith and Jose Morales had two hits each. This was the first time the Rockies have given Cain a loss since September 16, 2009.

Meanwhile, Jorge De La Rosa (who coincidentally was the last Rockies pitcher to earn a win in a Cain loss) had an impressive seven inning start against an offense that's given the Rockies fits this series, and dating back to last September, allowing just two runs on four hits and two walks with six strikeouts. Rockies nemeses Buster Posey and Freddy Sanchez combined for four of the Giants five hits.

While most of the Rockies offense broke out at the plate after being held silent by Tim Lincecum and Jonathan Sanchez the last two days, Dexter Fowler and Carlos Gonzalez continued to struggle, as the two outfielders went a combined one for nine with a walk and six strikeouts (four of the six were by leadoff man Fowler).

The win put the Rockies back to three games ahead in the NL West. 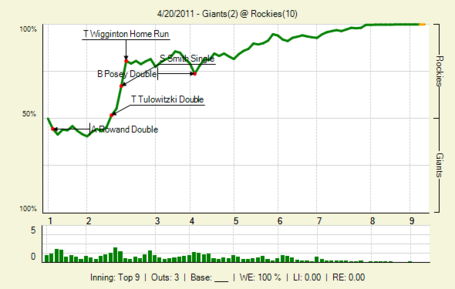