The Rockies started out "strong", with Dexter Fowler walking, advancing to 2B on a passed ball by catcher John Buck, advancing to 3B on a scrappy groundout by Johnny Herrera, and then scoring when Troy Tulowitzki reached on an error.

Dexter Fowler singled in the 9th inning through the hole between 1B and 2B to break up the ensuing No-Hitter. Dexter Fowler is the freaking hero of the Colorado Rockies. I take back anything bad I said about him today, because he broke up a no-hitter and scored the only run in the game for Colorado.

I'm writing this from the bar with the Jdub, and our loud obnoxious cheering at the breaking up of said no-hitter was booed by the residing bartender. 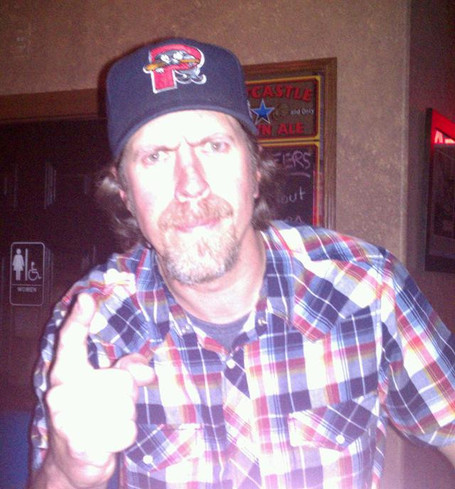 This is Mike, co-owner of the Providence Tavern. He got kind of mad with us when we ecstatically cheered for Dexter's bouncing BS single. He called us bad baseball fans. Whatever, we have our pride.

Seriously though, this game was just the perfect storm for a pathetic game. None of the offense could get a single thing going. Carlos Gonzalez continued stinking. Tulo couldn't get anything going. Jhoulys Chacin's strike zone shrunk to the size of a graham cracker while Anibal Sanchez' grew to the size of a Buick. There's only so much blame you can place on the umpire, but good Lord this was a bad game. I'm shocked they didn't rule Dex' hit an error because Mike Stanton kind of bobbled the ball while gathering it in in RF.

Whatever, it's a loss. It's a frustrating loss. We'll move past it, the Rockies are a better team than Anibal Sanchez suggested tonight.

Stuff past the jump 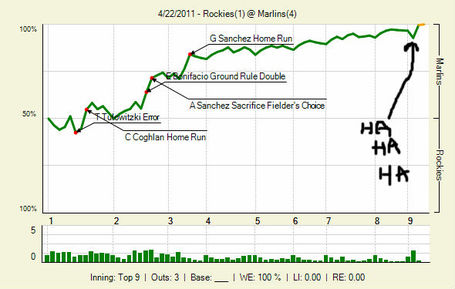 Players who did bad:

Everyone not named Dexter Fowler or Troy Tulowitzki

Players who didn't do so bad: