After a week of mostly shaky pitching performances from the Rockies, Jason Hammel came through with a well pitched gem as well as a crucial RBI to give the Rockies a three to one victory and a split series in Florida heading into Sunday's showdown between Josh Johnson and Ubaldo Jimenez. On the mound, Hammel pitched six and two thirds innings, scattering seven hits and a walk and giving up just a run before making way for Matt Lindstrom.

Meanwhile, on the offensive side, he contributed the Rockies third RBI of the night in the decisive sixth inning. Todd Helton and Seth Smith hit back to back doubles to lead off giving the Rockies runners on second and third with none out. Helton would score on a Ty Wigginton sacrifice fly and after Jose Morales was intentionally walked, Smith scored on a well executed squeeze bunt by Hammel.

The Rockies scored in the first after Dexter Fowler led off with a walk and eventually came around to score on a Troy Tulowitzki single. Colorado missed out on a significant scoring threat two innings later when Gonzalez failed to come through with the bases loaded and two outs. Gonzalez finished zero for, while Jonathan Herrera and Tulowitzki each had a pair of hits. Helton's double was the 532 of his career, drawing him to within two of Lou Gehrig for 31st on the all time doubles list, and his 901st career extra base hit, pulling him within one of Nap Lajoie for 59th on that list.

Rafael Betancourt pitched the eighth and Huston Street the ninth to preserve the victory, it was Street's seventh save of the season. 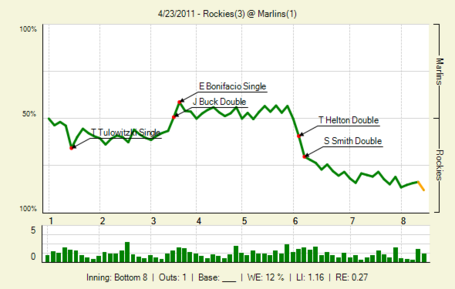 via www.fangraphs.com (they're apparently a bit slow catching up tonight).