Good News: The Rockies out-hit the Marlins by a 6 to 3 margin when Josh Johnson started the game.

Bad News: The Marlins out-scored the Rockies by a 6 to 3 margin. It helps that two of Florida's hits were a three-run triple and a three-run homer.

Good News: Ubaldo Jimenez gave up only one hit and struck out seven men.

Bad News: Jimenez also walked four men, including three to load the bases in the fifth. Also, the hit he gave up was the aforementioned bases-clearing triple. Also also, he only lasted five innings.

Good News: Mike Stanton is on my fantasy team.

Good News: Rockies pitching struck out 12 men on the day.

Good News: The Rockies still lead the West by at least 3 games and they still have twice as many wins as losses.

Good News: The Rockies don't have to play in Miami any more for a while.

Bad News: ... actually, there's not too much of a downside there.

In other words, there were a number of good things that happened in today's game from the perspective of the Rockies. Unfortunately, these positive indicators are buried in the fact that Colorado lost today. Nonetheless, I was particularly encouraged by the progress shown by the performance of Jimenez, despite his inefficiency.

Graph and Rowcall after the fold. 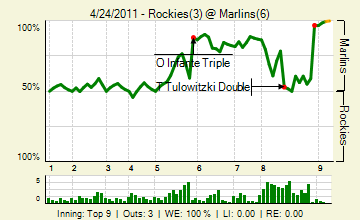