Rockies 5, Cubs 3: Starlin Castro Wins the Game for the Rox Despite Playing for the Cubs

Share All sharing options for: Rockies 5, Cubs 3: Starlin Castro Wins the Game for the Rox Despite Playing for the Cubs

Sometimes, it's better to be lucky than good, as Lefty Gomez once said. The Rockies can certainly vouch for that, as despite being outhit 11 to 4, they came from three runs down to defeat the Chicago Cubs thanks to four errors by the lovable losers.

Esmil Rogers wasn't at his best in the first inning, as he allowed a leadoff single to Kosuke Fukudome (who was a pain in the rear for the Rockies all night, going 5-for-5) and a two-run homer to Darwin Barney to find himself in a quick hole. After loading the bases directly afterward, he induced two flyballs (one of which scored a run) to get out of the inning, but not before creating a three-run deficit.

The Rockies would fight back in the second inning, thanks to three errors by phenom shortstop Starlin Castro. Troy Tulowitzki led off with a seemingly harmless grounder to short that Castro bobbled. Then, after going first to third on a Seth Smith single, Tulo would score on yet another fielding error by Castro on a slow dribbler off the bat of Jose Lopez. On the following play, Castro would come up with a grounder hit by Chris Iannetta, but he proceeded to fire the ball into right field, allowing Smith and Lopez to cross the plate. More of the same would ensue in the fifth inning after Esmil Rogers and Dexter Fowler reached base by a bunt single and a walk, respectively. Jonathan Herrera laid down a sacrifice bunt that was picked up by Matt Garza, and Garza foolishly rushed his throw about 15 feet over Carlos Pena's head, which allowed Rogers to score. The only run that did not score on an error came during the next at-bat when Carlos Gonzalez plated Fowler on an RBI groundout.

That was all Rogers would need, as he finally pitched a 1-2-3 inning in the bottom of the fifth before giving way to the bullpen (Matt Lindstrom, Rafael Betancourt, and Huston Street), who was fantastic yet again with 3.2 innings of scoreless ball. Rogers' final line: 5.1 IP, 8 H, 3 R, 4 BB, 3 K. Pretty underwhelming, but I guess he kept his team in the game and basically saved his best for last, so kudos there.

Meanwhile, Matt Garza picked up seven more strikeouts, raising his season total to 41 in just 30.1 innings. However, his defense failed him miserably in this one, and he remains without a win.

The Rockies weren't anything to write home about offensively yet again, as the Tulo-CarGo combo 0-fer'd yet again, this time in eight at-bats. The offense also struck out 11 times and drew just two walks, and one of their four hits was the aforementioned bunt single by Rogers. However, there are certain things you try not to worry about after a victory, I guess. At least, that's not OUR job. 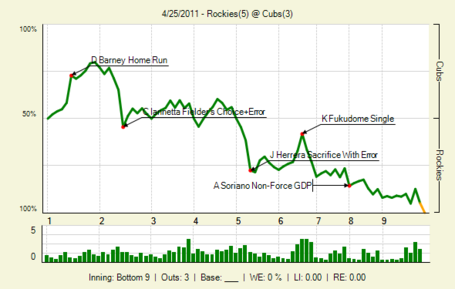 Tomorrow, the Rockies will send Jorge De La Rosa to the hill to square off against James Russell and the Cubs at 6:05 PM MT. If the Rox are able to win, it will be their first series victory at Wrigley Field since 2006.