Fan Confidence and Rebounding from Losses

Share All sharing options for: Fan Confidence and Rebounding from Losses

2 weeks ago, we talked about the effect that road trips have on the fans, with the following idea as our thesis: You win the first big road trip of the season, you win the fans over. This year, the Rockies did just that, winning 7 of 8 between Pittsburgh and New York. When they returned home to face the Cubs, over 110,000 Rockies fans came out for the weekend series (and yes, I realize that A. it's the Cubs and B. it's the weekend, but 110,000+ for a weekend series in April? Hard to beat that), and another ~90,000 fans came out for the Giants series - pretty impressive when you consider it was a M-T-W series and the weather got kind of grumpy.

And then Tim Lincecum nearly no-hit the Rockies. And then Jonathan Sanchez nearly shut the Rockies out. The world nearly ended.

So you're about to lose your first series at home. What do you to try and counteract this?

You go and beat the tar out of Matt Cain.

Seriously, for the past couple of years, the amount of trouble that Matt Cain seems to have given the Rockies has been at near-Scott-Hairston levels. Add Cody Ross into that equation and you have a recipe for indigestion and disaster.

After going down 1-0 on the wings of a Buster Posey single to score Aaron Rowand, after being nearly no hit by Lincecum and shut out by Sanchez, to see that Ty Wigginton home run scrape the top of the fence to give the Rockies a 4-1 lead in the game?

Need Icing on the cake? Jose Morales' double to bring the lead to 6-1. Need a cherry and candles? 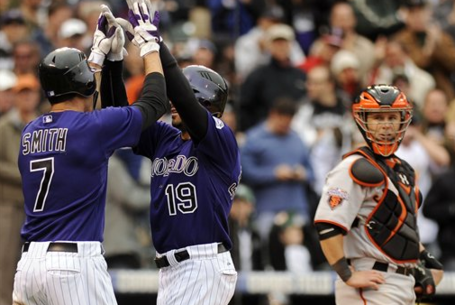 Ryan Spilborghs will not be silenced by the Giants.

No, the Giants series wasn't pretty. Neither was the Marlins series. But the Rockies 1. Rebounded strongly against a pitcher who simply seems to have their number in Matt Cain, and 2. Kept the games close in Florida, despite nearly being no-hit again by Anibal Sanchez.

That's confidence-inspiring to me. Knowing that down 2-0 in a series, the Rockies don't just keel over, and similarly can keep a tough road series close? Well, that sounds alright.

Oh, and one last thing:

Let's not forget that the Rockies are the best team in baseball. Let that Gillette poll know that.