The game felt like a Rockies win when Mike Quade and Jim Tracy submitted their lineup cards.  Despite the close score throughout the game, Colorado felt in control.  At the end of the day, the Rockies won yet another one-run game, pushing their record in 9-inning one-run contests to 5-0.  And for the most part, it was a win all the way.

Carlos Gonzalez was out of the lineup for just the second time in 2011, but his replacements did just fine.  Todd Helton took over the 3-hole and hit not one but two home runs to push his season total to three.  He didn't hit his third home run in 2010 until August 7.  And THAT August 7 was the three year anniversary of his last multi-homer game.  (Psst...it is only April 26...this is a good sign).  Ty Wigginton took over CarGo's spot in left field and responded with a big fly of his own in addition to two singles and a stolen base.

Up there with Helton as the nightly hero was Jorge de la Rosa, who continues to be quietly dominant in 2011.  The southpaw struggled in the first inning, as the Cubs barreled up several pitches early.  He maneuvered through with the chance of allowing just one run, but a two out routine ground ball went through Troy Tulowitzki's legs for an error and run scored.  From then on, the Cubs hardly stood a chance.

De la Rosa struck out nine without a single walk on the evening and departed after seven stout innings with just one charged earned run.  Even more encouraging:  after several first inning line drives, the Cubs had just one air out to seven ground outs.  Filthy.  De la Rosa is now 4-0 with a 2.61 ERA and is quietly building a resume to represent Colorado's rotation in the All-Star Game.  (Psst...by the way, that other lefty in the division who had a 3.00 entering today allowed four runs and fell to 2-3 today.

Huston Street hung a slider in the ninth to Alfonso Soriano, who deposited it in left field bleachers for a garbage time home run, but the lead was safe with Street at the helm.  The Rockies' closer secured the win for his MLB-leading ninth save (two more than any other reliever) in nine chances.

Colorado is just 4-4 in their last eight, but their win tonight pushes them 4.5 games ahead in the division.  That represents not only a season-high, but also the largest buffer for any divisional leader by two games.

The series win at Wrigley Field was Colorado's first in five seasons, and it pushes the Rockies' league-best road record to an astonishing 10-3.  No other MLB team has even won nine road games yet. 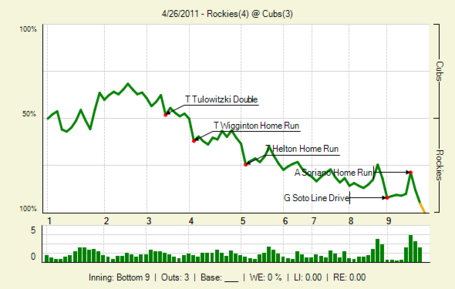