The Colorado Rockies offense has been subpar, especially of late.  Coming in, the had managed more than six hits in just two of their last nine games.  They came in hitting just .239 for the season, but in games where the hits weren't coming, the sticks had managed to avoid being shut out...until tonight.

Colorado managed just five singles on the night and never truly threatened against Kevin Correia.  The veteran right-hander was locating well, but Correia isn't the type of pitcher capable of exclusively recording goose-eggs without notable help from the offense.  Sometimes you tip your cap to the opposing pitcher, but not when that pitcher is Kevin Correia.  Amidst the swirling wind and snow, the Rockies offense finally let those eyelids fall all the way shut.

The Rockies have, in some ways, been fortunate to have such a sparkling record with an offense that been spotty at best.  So it is encouraging perhaps and ironic where those five menial singles came from.  Aside from Seth Smith, the remaining four hits came from gentlemen who were a combined 35-for-196 for the season (a .179 average).

Hopefully those hits "broke the seal" of those slumps.  Todd Helton did drive two balls to the warning track in left field, balls that would have been impressive opposite field home runs in more friendly weather.

The comprensibly feeble offensive effort ruined another splendid outing by Jhoulys Chacin, who was extremely sharp for 95% of his night.  The young right-hander allowed just six hits, but half were of the extremely damaging extra base variety.

Rockie-killers Garrett Jones and Andrew McCutchen took advantage of mistake pitches for solo home runs.  In his final inning, a two out single preceded a triple by Ronny Cedeno on a mistake two strike fastball over the plate.

Otherwise, Chacin was fastastic.  He struck out eight on the night and did not allow a free pass, and had the groundballs coming just as frequently as the punchouts.  Chacin falls to a hard-luck 3-2, with his ERA rising to 2.91.

Every team has clunkers in a 162 season.  It is a bit tough to swallow in a Chacin/Correia matchup when Chacin pitched very well.  Hopefully the bats remember Paul Maholm is slated to pitch tomorrow and snap out of it. 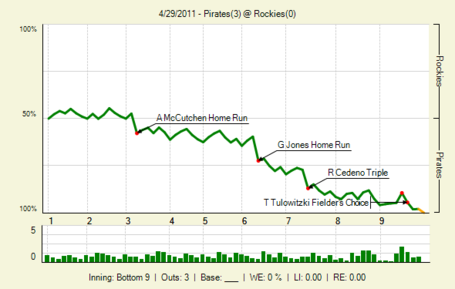