During the winter, Jason Hammel and Chris Iannetta worked out together to get in shape for the season in Providence, Rhode Island. The connection must have held, as the two united their powers to lead the Rockies to a victory over the Pirates on Saturday night, Hammel by pitching masterfully for seven innings after allowing a lead-off home run to Andrew McCutchen, and Iannetta by providing the winning margin with a three run home run in the second inning off of Pirates starter Paul Maholm.

Last week, according to a blog post by the Denver Post's Jim Armstrong, Hammel said this during Spring Training about Iannetta:

"I really think you're going to see a different guy. I've talked to him about it. Sometimes he couldn't get out of his own way. But I really believe he's going to be fine this year."

While Iannetta's batting average remains under .200, his bat has been providing a benefit at crucial times and his walking prowess has been mitigating the low average somewhat.

Hammel finished his start allowing six hits and two walks, while striking out four in those seven innings and was assisted by three double plays, all featuring some combination of Troy Tulowitzki and Todd Helton. While Tulo continues to slump at the plate after a hot start to the season, going hitless in four AB's tonight and 5 for 27 now since the Rockies started their road trip to Florida last weekend, other Rockies bats are showing signs of emerging from the cold. Helton had a double and a walk and Carlos Gonzalez broke from his slump with two hits and a couple of close calls.

Seth Smith drove in the Rockies first run with a single that scored Gonzalez, and then after a bunt single by Jose Lopez, Iannetta hit his third home run of the year.

The Rockies have evened this series at one apiece, and have a chance to win it with Ubaldo Jimenez taking the mound tomorrow. 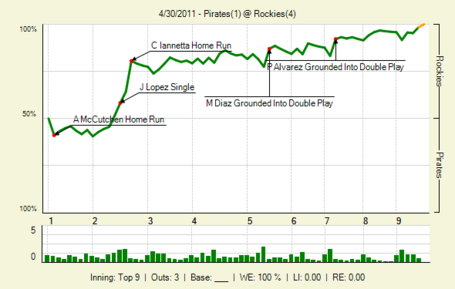